THE TROOPS OF DOOM Feat. SEPULTURA Alumnus Streaming The Absence Of Light EP Ahead Of Friday Release 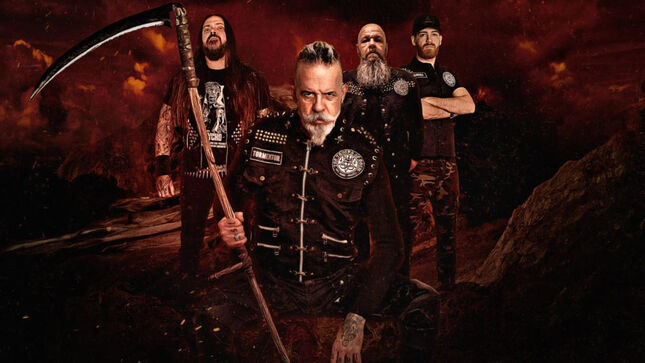 Brazilian death metal unit The Troops Of Doom will unleash their The Absence Of Light EP tomorrow, Friday, September 17. An advanced stream can be found below.

The Absence Of Light EP is a loosely conceptual work inspired by the book Leviathan, from 17th century English philosopher Thomas Hobbes. Elaborates Guedz, “I had finished reading Hobbes' The Leviathan and thought, ‘This is it! We have a concept for this EP.’ I'm very interested in the subject of how politics and religion determine people's future and especially the power they accumulate when the two merge into a single form of government…”

The Absence Of Light was mixed and mastered by Øystein G. Brun (Borknagar) at Crosound Studio in Norway. The EP features a guest vocal appearance by Possessed’s Jeff Becerra on the track “The Monarch” as well as Lars Nedland of Borknagar, Solefald, and White Void on bass on the first three tracks (“Introduction – The Absence Of Light,” “Act I – The Devil’s Tail,” and “Act II – The Monarch”) and Dave Deville conducting the orchestral introduction.

Additionally, the EP includes three bonus tracks: a version of Sepultura classic “Antichrist” mixed by Leonardo Pagani at LP Mobile Studio in Brazil and the demo versions of “The Devil’s Tail” and “The Monarch.” It all comes housed in the arresting cover art of Brazilian painter Maramgoni. With the world still uncertain in these pandemic times and the band being forced to postpone their European tour - and consequently their full album - to 2022, The Absence Of Light serves a bridge piece to their impending full-length.