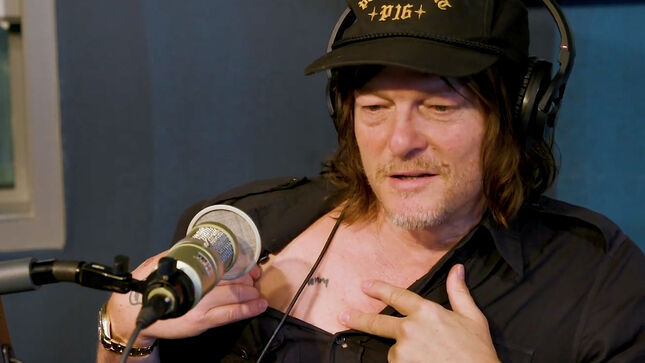 Throughout his conversation with Jose Mangin, Norman Reedus shared his Anthrax story, Lemmy tattoo, music influences and much more. Watch below.

Jose Mangin: I didn't know you had a Lemmy tattoo.

Norman Reedus: "Yeah. Yeah. It's right. It's a little tiny one. They gave us five minutes to get it. Is that it? Or is it.."

Jose Mangin: Oh my God. Yeah, dude, you got a five-minute Lemmy tattoo.

Norman Reedus: "Yeah, yeah. With Brent cause we were shooting Ride. We were in New Orleans and, and we went by a tattoo shop, this, this guy named Cornbread and we went in and Lemmy had just died and we're like, "We gotta get a Lemmy tattoo." And they go, "You have five minutes." And we ran in and got one really quick and ran out the door, Brent and I."

Jose Mangin: To know that Brent, our friend from Mastodon, guitar player singer was an inspiration for the Anne character and her friends. That's fucking cool, dude. This, this book is even more metal than I thought it was dude. Fucking awesome.

Norman Reedus: "He actually I think used to jump trains with Cornbread, the guy that gave us the tattoo. I might be getting that story mixed up with another dude, but..."

Norman Reedus: "Yeah. But you know, Brent's a good friend of mine. He's got all these great stories and I kind of just ran with that in a different perspective. Uh, yeah. And then the Jack character, you know, it starts off, it starts off with him working at a bike shop. That was me actually working in a bike shop in Venice, California, way back when, so, you know, down to our same tattoos in the book almost, you know."

Jose Mangin: I get so excited, Norman, I'm such a metalhead and supporter. And when I see metal bands mention in mainstream books like this and you, you talked about Slayer posters, Slipknot posters, Slayer songs being played in the background, Slipknot t-shirts and shit. Itch is a big Panera fan. You know what I mean? I'm like, this is fucking cool. One of the dudes that hangs out with Hunter. So, I was like, I was, I was proud of you dude. Cause I know that you are a fan of the music and stuff. And I know you played bass with anthrax on stage before, which is pretty cool. I remember that happening.

Norman Reedus: "I had, I had a rockstar moment there for a second. I was, I was super nervous. You know, I got out there and you know, Frank was kind of like dragging me out there. I was like, "No, no, no I'm terrified." And he's like, come on. And uh..."

Jose Mangin: That's so cool. But I remember you, we were both watching Anthrax perform at the Revolver Golden God's Awards many years ago in New York City. That was the cool moment, where you introduced Anthrax and you know, you're a great actor dude, but just to see you introduce one of my favorite bands on stage and you had a really cool story with it. That meant a lot to see you do that, man. I was like, "This dude's for real man." You're a, you're a fan of the music, man. So, I love that. When did it start for you?

Norman Reedus: "You know, what's crazy too is it's different, but do you remember that Scorpions album cover with the forks in his eyes and he's screaming?"

Norman Reedus: "Do you remember that?"

Jose Mangin: That's not, was that Blackout or?

Norman Reedus: "Yeah, that's Blackout. Yeah, that painter who's, that's a self-portrait of him. I'm friends with his daughter now and she's an amazing. Her name's Mercedes [inaudible], his daughter's a really awesome painter that lives out in California. And I have a ton of her paintings weird but cool. And I remember that, you know, I remember, I remember my mom used to blast Pink Floyd, the wall, like she had these giant speakers, like, you know, seventies speakers and she used to blast that, and I used to get so lost in the artwork for that album. Like I would just hours I'd just be lost in that artwork. And then that film came out that animated film, but yeah, I've always, I've always been a big fan of all of that."