THE WHO Vs MICHAEL JACKSON In "I Can't Beat It"; The Who-Approved Mashup Video Streaming 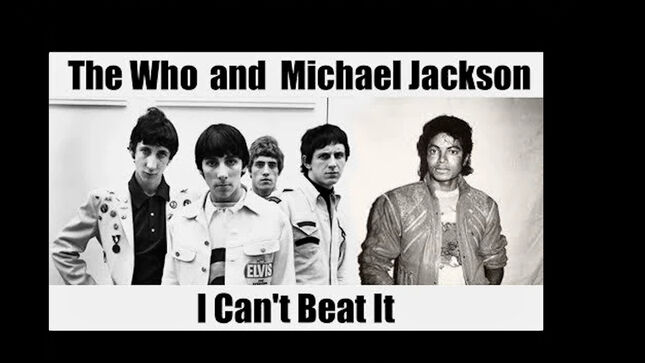 Ray C Mashups has released the video below, along with the following tongue in cheek message:

"In the early 1960s, violence between England's mods and rockers was becoming increasingly common. Tensions reached a fever pitch in May 1964 during two days of fighting and riots in Brighton and other nearby seaside resort towns. It was against this backdrop that Michael Jackson and The Who came together to record one of the era's most enduring anthems. Jackson and his family had personally witnessed gang activity in Gary, Indiana. "From our front window we saw three or four bad rumbles between rival gangs," Jermaine Jackson later recalled. "I think that was why Michael reached out to Pete Townshend. He disdained violence and wanted it to stop on both sides of the Atlantic."

"When the "Who's Bad" EP with guest singer Michael Jackson was released in early 1965, it created quite a sensation. "I Can't Beat It" was a smash hit in the UK. The follow-up singles "Bubbles O'Riley (a.k.a. Teen Ape Wasteland)" and "Don't Stop 'til You Get A Magic Bus" didn't crack the Top 40 in the US but were fan favorites and later became staples on AOR radio."

A message from The Who states: "We love a well-put-together mash up and we reckon this one really made the grade. Happy Friday, Wholigans."