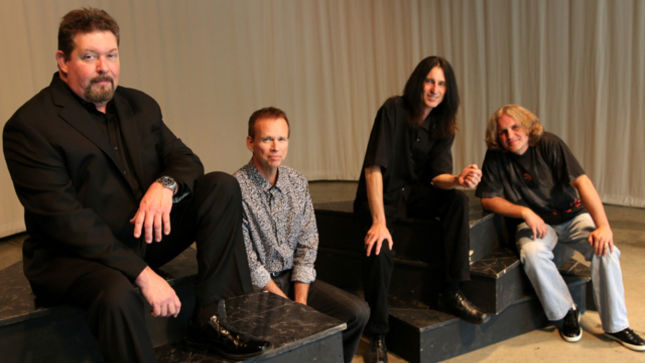 Since 1995, Tiles has issued six prior albums, including their debut on Dream Circle Records, a record on Standing Pavement Recordings, and four albums on Inside Out. The band's first studio album since 2008's Fly Paper, and their first for Laser's Edge, Pretending To Run clocks in with over ninety-six minutes of incredibly expansive, brand new material, spanning two discs. Pretending To Run is an ambitious and richly crafted concept album that spins the tale of a man blindsided and disillusioned by betrayal. Brooding and expressive, Tiles explores the dark subject matter by weaving stylistically diverse musical elements throughout their progressive hard rock platform. Lyrical string arrangements, haunting choir performances and reflective soundscapes coexist with hard rock heaviness to create a tapestry of emotional drama as the songs chart a path from isolation to redemption.

Laser's Edge released the following statement on bringing the band onto the label's roster: "Tiles has long been one of the standard-bearers of American progressive rock. I first saw the band perform back in 1999 and they've been on my radar ever since. It's a pleasure to add them to our roster and I'm looking forward to our collaboration. When I first heard Pretending To Run it was clearly and unmistakably Tiles but infused with a more expansive sound. The contributions from the guest artists take Tiles into new directions that will please their fans old and new."

Collectively issues Tiles in a statement about the signing, "We are extremely pleased to partner with the Laser's Edge to release our long-awaited new double album, Pretending to Run. For over twenty years, progressive rock and metal aficionados have come to rely on the label's discerning judgment for releasing the finest in new progressive music - so joining their roster is indeed a gratifying compliment! We are confident they will put the full force of their expertise into bringing Pretending to Run to the attention of progressive hard rock fans everywhere."

Pretending To Run will feature artwork by Hugh Syme and is scheduled for a March 4th release through Laser's Edge. Stand by for the album's tracklisting, cover artwork, production/studio videos, audio samples, several official music videos, Tiles tour dates and much more to be announced throughout the coming months.