TOMMY THAYER Looks Back On BLACK 'N BLUE, Connecting With KISS For The First Time 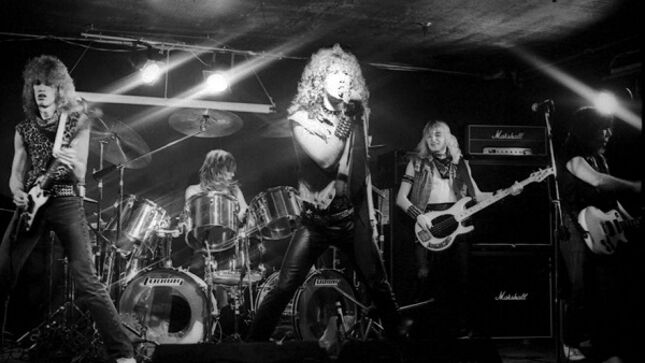 KISS guitarist Tommy Thayer is featured in a new interview with VW Music discussing his previous band, Black 'N Blue. Following is an excerpt from the in-depth chat.

VW: The tour for (second album) Without Love is notable as it seemed to officially begin both your, and Black ‘N Blue’s association with KISS. I think it’s safe to say that touring with KISS in the 1980s was an entirely different animal than touring with Aerosmith, right? Take me through your supporting role on KISS’ Asylum tour, and the events that led to Gene Simmons producing Black ‘N Blue’s next two records.

Tommy: "I think Without Love came out in September 1985, and it was around that time our newly hired manager, Warren Entner, called me at my apartment in Sherman Oaks, and told me we’d been selected to do twenty-something shows opening for KISS, starting in November. It was another one of those, 'Is this a dream and I’m going to wake up soon moments?' When we arrived at the arena for the first show in Little Rock, we were hanging around. Gene approached us and was friendly, immediately talking to us, Bruce was cool, and we talked a lot about guitars. The second or third day in Memphis, we were hanging around and Gene pulled Jaime and me aside and said, 'You know that intro you did last night? Well, there this band that’s been around since 1903, and it sounds too similar to their intro, you might consider changing it.' The tour was an eye-opener, we played all the big places, the Summit in Houston, the Spectrum in Philly, and Madison Square Garden in New York City. We finished New Year’s Eve 1984 in Atlanta.

The first week of January 1985, we got a call from the record company, they said, 'You’re done touring for now; we want you to start on your next record.' I thought, 'Wow, didn’t Without Love just come out a few months ago?' So, we started writing songs and doing more demos. A month later, we found out we were going to open one more show for KISS in Las Vegas the following week. We’d been talking a lot about Black ‘N Blue’s image and sound, and wanted to get back to where were before Without Love. We thought, 'When we’re in Vegas, we’ll ask Gene if he’d be interested in producing our next record.' Somehow, we got word to him that we’d like to sit down and play him the demos we’d been working on. A meeting was set for after the Vegas show in Gene’s suite at Caesars Palace. At that point, I don’t think any of us had been in a hotel suite like that. While we were there, I think Gene was trying to impress us, calling his road manager to arrange a $10,000 marker for gambling after the meeting (laughs). We played him our new songs and said, 'What do you think?' He said, 'I’ve got a big mouth, I’ll tell you what I think, yes I’ll produce you."

KISS Kruise X kicked off on October 29th and concluded on November 3rd. Mike Brunn, who runs the The Rock Experience With Mike Brunn, has shared footage from KISS Kruise X featuring KISS guitarist Tommy Thayer back on stage with Black 'N Blue. Check out the set below.