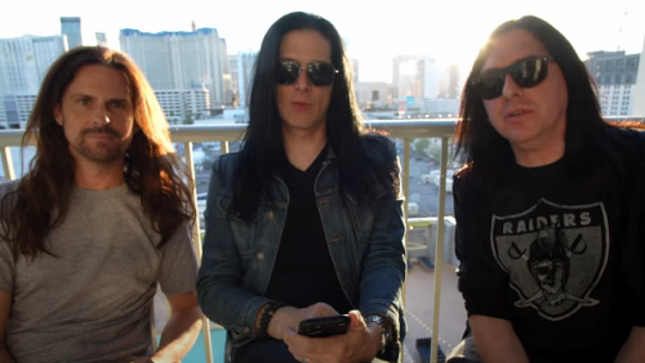 Three of the four members of all-Canadian, predominently cover band, Toque - Cory Churko (Shania Twain), along with Todd Kerns and Brent Fitz (both of whom play in Slash Featuring Myles Kennedy And The Conspirators) - recently got together on a balcony in Las Vegas to chat about the upcoming Toque tour schedule, as well as football and hockey; Shane Gaalaas (Michael Schneker Group) was not present. See for yourself in the video below.

Catch Toque live across Canada in 2022 at the following shows:

"Up To You" is the first new track in two years from the assembled Canadians whom have become known around the world for their longstanding contributions to several World Class acts.

Produced by Toque guitarist Cory Churko, the song picks up the band’s love of hook-filled rock music that has fans and audiences singing along. Classic rock influences, and modern feel, bring rock fans something that many are missing if they grew up on arena acts. Get ready to rock again.  After all - it’s "Up To You".

"Up To You" is now available on Spotify.

Check out Toque's first original single / video, "Never Enough For You", issued in 2019.