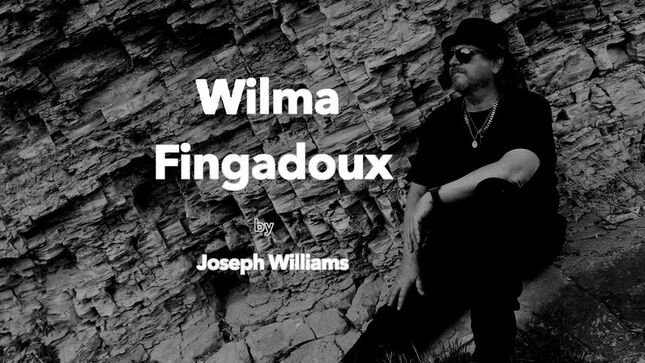 Joseph Williams and The Players Club / Mascot Label Group present "Wilma Fingadoux," the third and final instant gratification release from his upcoming new studio album out February 26. The accompanying video was self-produced and directed by Williams can be screened below.

He offers, “’Wilma Fingadoux’ is the latest in a long line of musical messages, songs and poems to my mother who died at the age of 41. I was 13 years old. This song is a reflection of the painful yet wonderful place in my memory where I can speak to her.  Also singing with me are my daughters Hannah Ruick and Ray Williams. Their voices, their presence, makes me so proud of my beautiful girls and their unparalleled talent. And I feel relief also because in this way they too can speak to her through music the way I always have. My mom had such a sharp sense of humor. The title of the song is the punch line of one of my favorite jokes she used to tell…she taught me how to feel funny deep inside! This lyric is my release letter. Miss you Momma! Xojoe.”

Steve Lukather (aka “Luke”) and Joseph Williams will release individual solo albums on February 26 via The Players Club / Mascot Label Group. Both artists have made significant contributions to the other’s album.

Steve Lukather’s solo album titled I Found The Sun Again was co-produced by Ken Freeman, who also both engineered and mixed the new collection of repertoire.  The players feature many dignitaries that have been in Luke’s life for decades. Amongst those are drummer Gregg Bissonette, keyboardist Jeff Babko, and bassists Jorgen Carlsson and John Pierce. Life-long friend and Toto band-mate David Paich performs piano and organ across the album, while Joseph Williams sang on multiple tracks alongside writing string and horn arrangements and tracking keys on the aforementioned “Run To Me.”  Both Paich and Williams co-wrote that specific composition, while friend and band leader of the All-Starrs, Ringo Starr makes a special appearance on the recording and in the video.  Other co-writers include Stan Lynch, Jeff Babko, and of course Joseph Williams.

Joseph Williams’ Denizen Tenant was self-produced outside of the compositions “Black Dahlia” and “No Lessons” which were arranged and produced by Jay Gruska and mixed by Dave Way. The musicians and singers who made contributions in the studio reads like a who’s who of players that have been in the artist’s life over the past four decades. Amongst these contributors are band-mates from Toto David Paich and Steve Lukather. Simon Phillips, Leland Sklar, Lenny Castro, Nathan East, all of whom enjoyed tenures in Toto are also featured players on the album. Additional contributions include performances by Oscar Bugarin, Jay Gruska, Mike Landau, Barbara Gruska, Steve Overton, Dylan Ronan, Hannah Ruick, Steve Tavaloni, Weston Wilson, Ray Williams, and Mark T. Williams.  The album was produced and mixed at Digbyroad Studios, Sherman Oaks, CA.

There are so many contributors with deep connections and history with the artist, all of whom have a significant footprint on Denizen Tenant. For a complete overview, click here.

The recordings will be available individually on both CD and LP, alongside on all streaming services globally. A limited-edition deluxe edition is available with the two titles bundled together. The pre-order is now live and available here: Steve Lukather, Joseph Williams.

Luke and Williams hope these albums present an enjoyable experience when listened to on shuffle.