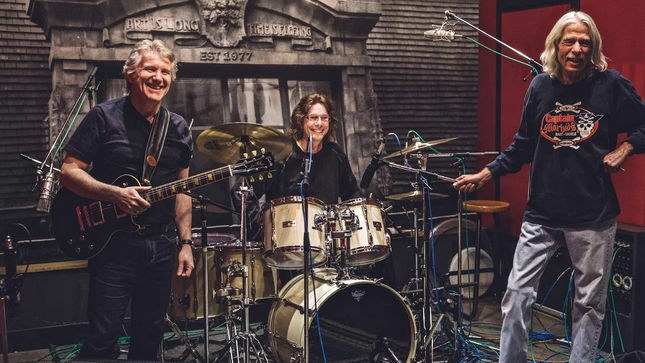 Moore: "The directors (of Rock & Roll Machine), which are Sam Dunn and Marc Ricciardelli, I think they did a really brilliant job taking what is really a bunch of stories and a bunch of characters, and tryingto bring them together to create a narrative. What I find really boring about so many documentaries is that you don't get any real subtext. It's like an interview that you've heard a million times, wheras in this film it's so whacky; it's like a ping pong ball bouncing all over the room and you're tryingto follow it, yet the story is intact. The storytelling is so interesting because of the characters involved. I think if they had just relied on interviews with the band it would have been a really boring documentary. I think you have to get all these othert lenses into what was going on to make it interesting."

Banger Films, in association with Revolver Films, is proud to announce its latest feature, Triumph: Rock & Roll Machine, will make its US  premiere at the Philadelphia International Film Festival.

Before Drake and The Weekend, there was a different set of Toronto musicians who rule the roost. Known simply as Triumph, this rock trio - which includes drummer/singer Gil Moore, singer/guitarist Rik Emmett, and bassist/keyboardist Mike Levine - dominated North American radio and MTV in the ‘80s with hits such as “Lay It On the Line,” “Hold On,” and “Magic Power.” Despite being one of the world’s biggest rock bands, the group split at the height of their fame and seemingly disappeared without explanation to their fans or media. Set to a mesmerizing visual backdrop of spandex, 80s hair, and explosive pyro, Triumph: Rock & Roll Machine delivers a deeper story about fame and the human condition while chronicling the band’s reunion for what might be the very last time they play music together.

“The Triumph story was compelling to me, Marc, and the Banger team because it was an opportunity to piece together a broken puzzle,” says Sam Dunn. “We wanted to know how and why the band dissolved at the peak of their powers.”

“Sam and Marc did an outstanding job documenting what it’s like to have been aboard the Triumph train for the past 45 years,” raves Triumph bassist Mike Levine. “For fans old, new, and those to come in the future, this is all they’ll need to know about the band. It's great that the doc is making its USA premiere in Philadelphia – Triumph always looked forward to playing for the amazing Philly fans.”

Triumph: Rock & Roll Machine premieres at Philadelphia International Film Festival on Saturday, October 23 at 9:30 PM at PFS Drive-In B and screens again on Monday, October 25 at 8:45 PM at Ritz Bourse 2.