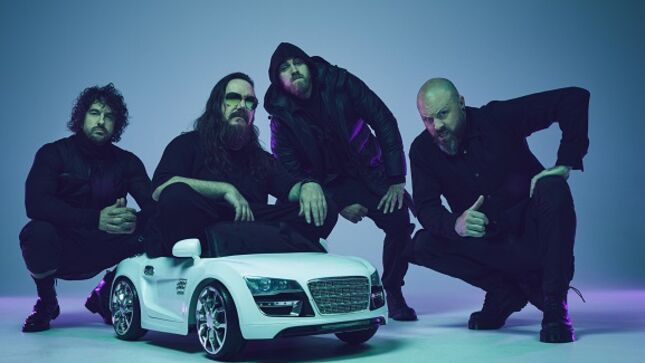 Twelve Foot Ninja mark the release of the Australian band’s long-awaited third album album, Vengeance (Volkanik Music) with the release of a video for the title track. Check it out below.

Guitarist Stevic Mackay summed up the strange beast that is "Vengeance" as follows:

“There are definitely some ‘80s inspired permeations in the genre permutations, but I think we became clearer on the distinction between ‘songs’ and ‘riffs’; there’s a clear harmonic bone-structure carrying all of the songs.”

"Vengeance" features a squall of industrial-grade synthesized guitars intercut by a patter of digital beats and a sinewy, Tokyo-tech cabaret feel. The ominous intro builds the tension to an expected crescendo, only to pull it back which forces you to focus on the lyrics….seemingly a deliberate decision aligned with the band’s much talked about prioritization on wordsmithing of this album.

The 10-song album was released in tandem with a high fantasy novel detailing the story of the Twelve Foot Ninja: The Wyvern and The Wolf, from author Nicholas Snelling. The 1000-page book is based on the original concept by MacKay. Set in a grim and savage world, the novel tells the tale of an orphaned samurai boy called Kiyoshi who is adopted by the ruthless leader of a clan of ninja. Much more than a mere origin’s story, however, the novel is a tour de force in fantasy fiction and world-building. The novel is available now in paperback from TwelveFootNinja.com or eBook from Amazon.

About the album and accompanying content, Mackay said: "This is an exorcism of content that’s spent a decade in gestation. 'Catharsis' is close to what it feels like to finally share Kiyoshi’s story; and I guess respond to all questions pertaining to our name; All this time, so many have thought Twelve Foot Ninja was tongue-in-cheek, when in actuality, the story’s genesis occurred a year before the formation of the band. I really hope our fans enjoy the vastness of what we’ve created, and we’re able to continue to surprise people with new methods of storytelling."

Twelve Foot Ninja has never neatly fit into one musical genre, and true to form, Vengeance sees them explore a whole new rich sonic palette. In a sense, the album cover artwork says it all – a decrepit ’80s-era arcade video game listing sideways after being rudely plunged into the cracked earth of a dystopic wasteland. It’s a nexus where pinball meets post-truth.