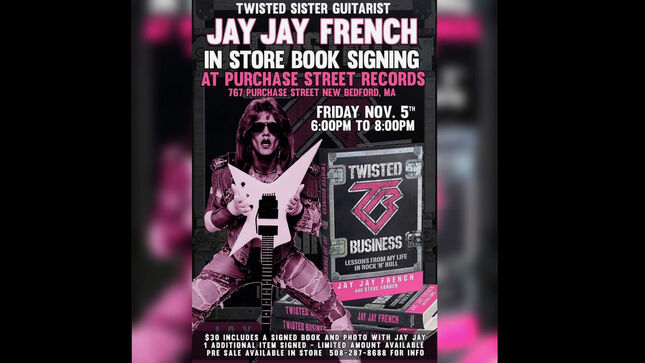 Jay Jay French, founder, guitarist and manager of the world-famous heavy metal institution Twisted Sister, has scheduled a weekend of in-store appearances to promote his new “Bizoir” - part memoir and part business primer - Twisted Business: Lessons From My Life In Rock ‘N’ Roll, the weekend of November 5-7 in Massachusetts and New York.

Join French on Friday, November 5 at Purchase Street Records in New Bedford, MA, from 6 to 8 PM for a book signing and photo opportunity.

On Saturday, November 6 at 4 PM, French will appear at New York City’s Generation Records. The appearance will include a discussion with French, moderated by The New York Hardcore Chronicles Live! host Drew Stone.

The weekend will wrap up on Sunday, November 7 in West Babylon, NY, with a signing at Looney Tunes Record Store beginning at 4 p.m. Purchase copies of the book now to receive a wristband.

Co-written with Steve Farber, bestselling author and one of the world’s top leadership and management experts, Twisted Business follows French’s life from growing up as John Segall on the Upper West Side of Manhattan in the ‘60s - using and selling drugs in Central Park West - to quitting cold-turkey after a near-fatal overdose, to creating and cultivating Twisted Sister, turning it into one of the most successful brands in the world.

French offers honest, funny, heartfelt, entertaining in-the-rock-band-trenches stories, as well as unique, hard-earned tips and advice to anyone hoping to create their own brand, re-invent themselves, grow a business or simply love what they do.

French started the internationally renowned Twisted Sister nearly 50 years ago and has amassed 37 gold and platinum albums as a musician, manager, producer and executive producer while having performed over 9,000 shows in 40 countries and selling 20 million records around the world. A charter member of the Long Island Music Hall of Fame and the costar of the critically acclaimed documentary We Are Twisted F*cking Sister, he is considered a leading expert on vintage guitars and high-end music equipment.

Though legions of fans know French as the yellow and black-clad guitarist for Twisted Sister, he also shines as a business leader who developed Twisted Sister into a global brand with multiple revenue streams and built it into one of the most licensed heavy metal bands in history. Host of the popular podcast The Jay Jay French Connection: Beyond the Music, French is also a columnist as well as a Keynote Motivational Speaker delivering presentations to global Fortune 500 companies as well as to nonprofits.

Twisted Business: Lessons From My Life In Rock ‘N’ Roll by Jay Jay French and Steve Farber is available now via RosettaBooks.