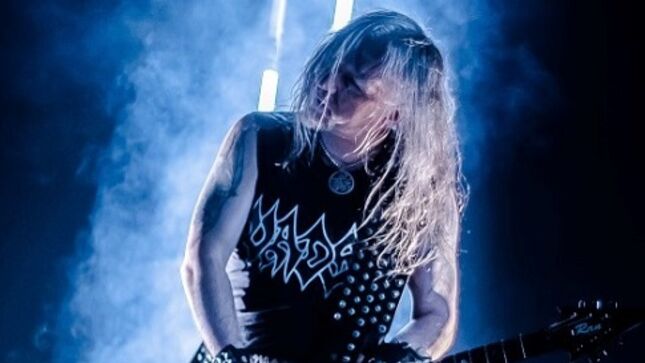 Polish death metal legends Vader have issued their Happy New Year message to their fans, also revealing plans for this year, read below.

"Vader Maniax! Happy New Year 2022. We really really hope, that all the global situation with pandemia won’t ground tours and shows for the next months. It is about time to hit the road again, isn’t it?"

"Together with Massive Music, we will try to start late February in Poland with some very special setlists, bringing back memories from early days. Besides a list of Polish songs we’d like to bring back, some tunes from Revelations (20th anniversary in 2022). Of course, this is just a supplement to the regular list presenting songs from the new album, or still expected De Profundis."

"In March - as you already know - we’ll be back on the United Titans Tour, with our friends Marduk, to visit around 20 cities in Europe. Some of the dates were already posted, and more are coming soon. In Spring, we’d love to be back on American soil and Canada. We are in progress with arranging that, more info asap. Summer time is festival time. For Autumn, together with Creative Music, we plan a huge tour in Scandinavia, all around the Baltic Sea. Right after, we’re gonna fly to the Far East to visit the eastern part of our beautiful Earth including Australia or Japan."

"In 2022, in co-operation with Nuclear Blast, we’ll bring back Vader’s classic „Black to the Blind” album for its 25th anniversary. Expect a real beautiful edition indeed! A new edition of the legendary Sothis EP will be available as well. We can’t forget about the 30th anniversary of the Vader debut, The Ultimate Incantation. Of course, we are still thinking what can we do to commemorate this event? This will definitely follow with some special events. And this is not all. So keep your fingers crossed and… see you in the pit!"

The new United Titans Tour 2022 dates are as listed: