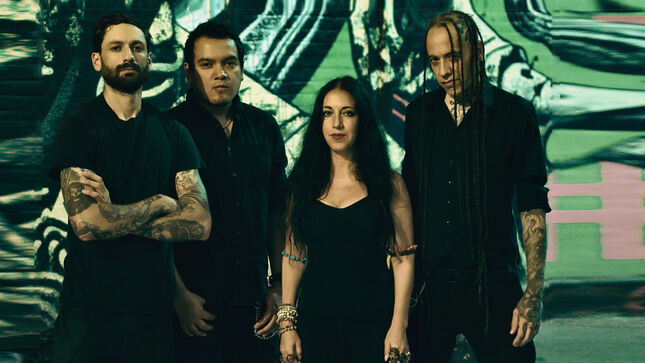 Just in time for Halloween, Varja release a disturbing, horror-themed music video for “Wavering”, a dark ambient piece from their Irkalla EP.

Written, produced, shot, and edited by vocalist Annamaria Pinna and bassist David Sussman, “the video for 'Wavering' is the third chapter of a larger film inspired by the Sumerian classic hero myth, Descent of Inanna,” explains Pinna. The pair just received three Official Selection distinctions from the Montreal Independent Film Festival 2021, the 2021 ARFF Paris and the New York Independent Cinema Awards for their video “Maya”, which was released last year.

On the release of “Wavering”, Pinna reveals, “This song is a very different format from the last three singles we've released. It's more of a meditative piece rather than a full-on alt-metal song. In 'Irkalla', our objective was to weave a tapestry of melodic alt-metal with dark ambient experimental pieces that create an esoteric space to explore the dark night of our souls. 'Irkalla' is meant to be listened to in its entirety, and 'Wavering' is a part of that experience. What is important is that the music may provide a portal to go on a journey. The journey will be different for each individual. My musical heroes have done this for me. 'Wavering' may surprise some of our fans and we are excited to introduce this song as a bridge to our dark ambient musical side."

In connection with the release, Varja will be holding a contest to give away the handmade coffin featured in the "Wavering" music video to one lucky fan, along with a full Irkalla gift pack including: Irkalla vinyl, CD, T-shirt, ritual pack, mask and stickers. Yes, Varja is actually giving away a coffin; a hand-constructed pine box made by an Upstate New York casket artisan, and perfectly suitable for burial. For contest rules, check out the band's website and socials. The winner will be announced at midnight on Devil's night into Halloween, and will be personally hand-delivered by the band within 99.9 miles of NYC. The contest is free to enter. Contest rules and details are on Varja's website and social media pages.

Irkalla is available both digitally and physically on CD/vinyl. Physical copies include an additional dark ambient EP dubbed the Shadow Queen Ritual Music, which is not available anywhere else.