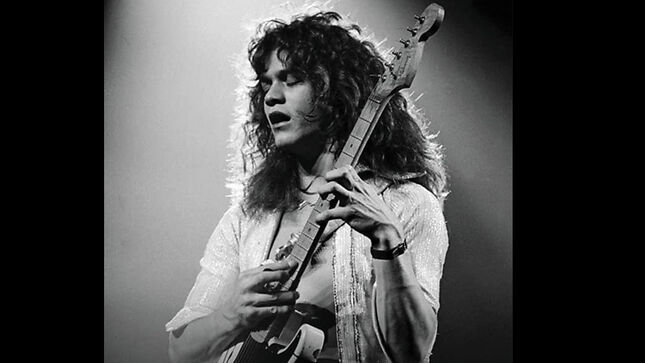 Greg Prato spoke about the book with Brad Tolinski for Songfacts, and you can read an excerpt from the interview below...

Greg Prato (Songfacts): When did you first meet Eddie and how many times did you interview him over the years?

Brad Tolinski: "I first met Ed probably in the late 1980s or the early 1990s at a NAMM show. I was just starting as the editor-in-chief of Guitar World, and we needed an interview with Ed done about his new guitar – I think it was the Music Man guitar at that time. And as the editor-in-chief, I was able to assign myself to the story! [Laughs] Good excuse to chat with Ed. After that, we probably spoke – on record or off record – at least a couple of times every year for the next 25 years. I talked with Ed pretty regularly.

My co-author, Chris Gill, also spoke with Ed quite a bit. Towards the end of my reign at Guitar World, I was overseeing something like four or five different magazines and I was writing less. And when it came to Ed, I tended to assign Chris because he was so knowledgeable about Ed's music and his sound. They got along really well, as well. So, that's why I also brought him in on the book."

Songfacts: For many years, I – and I'm sure many fellow Van Halen fans – was under the impression that Eddie had the perfect life. He was in one of the world's most successful rock bands, had money, a beautiful wife, a child, and universal praise for his guitar playing. But as readers will find out in the book, he was a troubled person... or perhaps a "tortured artist."

Tolinski: "I would say this: He was a complex person. The image that most people have of Ed is sort of like this all-American guy with this beautiful smile and living a charmed life. But what I really wanted to present in the book was this full picture of him. And there's just this incredible arc to his story.

A lot of his personality was determined by emigrating from Holland to America at an early age. As an immigrant, he couldn't really speak English, so the first few years of his life here were incredibly difficult because he was just tossed into school, couldn't really speak English, got picked on a lot. And that gave him a certain amount of social anxiety that I think stayed with him his entire life.

On the positive side, that made him retreat into this world of music. He couldn't really communicate well using the English language, but he still had the desire to communicate, and he did that through music. And I think that is where his dedication, intensity, and all of his focus came from, first with his piano playing, then on his guitar playing."

Read the complete interview at Songfacts.

- Eddie's battles with social anxiety, which encouraged later problems with alcohol and cocaine

- His impact on the guitar industry, including how he built his own guitar with spare parts, known as “Frankenstein,” and created a trend that eventually changed the way electric guitars were made, revolutionizing the guitar industry

- His long and complicated marriage to Valerie Bertinelli; his close relationship with his son/bassist Wolfgang Van Halen; and his marriage to second wife and publicist Janie Liszewski, who helped him recover from substance abuse and supported him through his many cancer treatments

- Details of his 20-year cancer battle and death