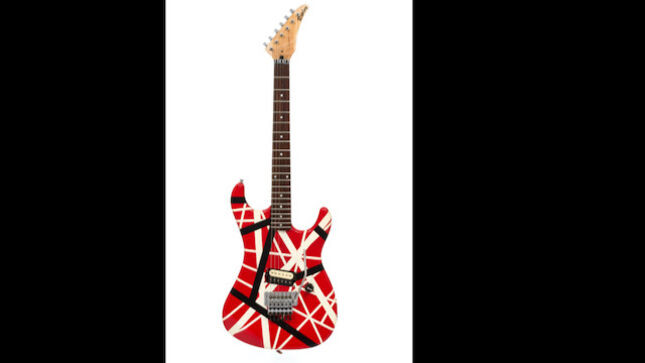 A Frankenstrat guitar originally owned by Eddie Van Halen was sold yesterday for $50,000. via Heritage Auctions.

Description: The instrument was made for Eddie circa 1984 by Steve Ripley, who was renowned for his stereo guitars that Eddie used on songs like "Top Jimmy". Built from a Kramer Striker very early in the Ripley/Kramer era as it does not have stereo. The instrument is believed to have been used by Eddie as a backup guitar on the 1984 and 5150 tours in the mid-1980s.

The guitar features Steve Ripley's custom-made, dark-colored Rosewood neck which is extremely rare as Eddie typically used light-colored maple necks. Only several Rosewood Frankenstrats were made for Eddie, this being one. The body has been spray-painted and striped by hand, presumably by Eddie himself, given the instrument's vintage. The white painted stripes are tinged with a light yellow, or cream color, both from age, and extensive exposure to cigarette smoke while on tour with Van Halen in the 1980s. Has a Floyd Rose tremolo.

The guitar was given to the consignor in 1990 by rock guitarist and vocalist Leslie West of the group Mountain, who had received the instrument as a gift from Eddie Van Halen several years prior. Van Halen cited West as one of his primary musical inspirations. The consignor is a noted, professional bodyguard who, for more than 30 years, has worked with some of the biggest names in the music and film industries. Between 1989 and 2001, he worked as Leslie West's personal bodyguard, spending a considerable amount of time with Leslie both on and off the road. The guitar's various nicks and metal coating wear are known to be from Eddie Van Halen. 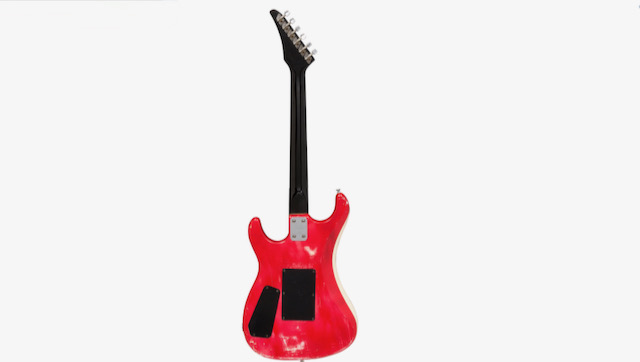