Veteran Rocker PHIL NARO Loses Cancer Battle; "One Of The Finest Human Beings I Have Ever Known," Says BILLY SHEEHAN 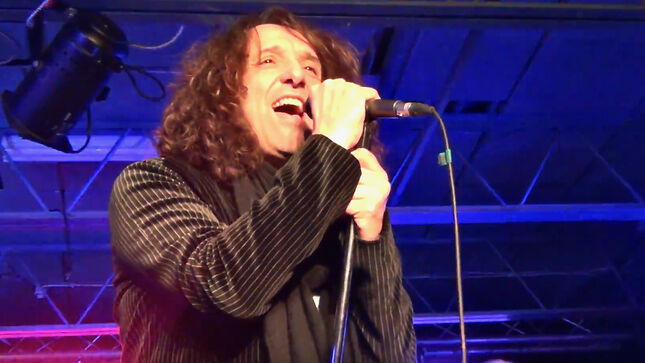 "It is with great sadness that we must announce the passing of our son, father, friend and musician Phillip Sampognaro, known professionally as Phil Naro. Phil fought a valiant battle against cancer over the last few years but left this earth last night surrounded by his family and closest friends.

A citizen of both The United States and Canada, he died at his home in Rochester. Funeral arrangements and tributes will be announced shortly. He is survived by sons James and John; brother Joseph; and his mother, Maria, who he loved dearly.

Phil was one of those rare individuals known as a “singer’s singer.”  A staple of both the Canadian and US music scene, Phil had become a mainstay in venues ranging from clubs to large performing arts centers and massive arenas. He had just completed the debut album from the band Lips Turn Blue (formerly D Drive) which had secured a worldwide record deal, and a reunion album with Billy Sheehan & Talas, of which he was a member in the 1980s.

Phil had successfully balanced an in-demand solo career with a number of high-profile projects with other superstar musicians from bands such as The Rascals, Vanilla Fudge, Whitesnake, Yes, ASIA, and guitarist Ron Thal (ex-Guns N Roses) as a member of The Platinum Rock All Stars. Phil was capable of an extraordinary number of music styles all built around his unmistakably powerful voice. Fortunately, Phil left us with an extraordinary amount of recorded music, which will allow his artistic legacy to live on forever."

Billy Sheehan took to social media to pay tribute to Phil Naro, stating: "Phil Naro. One of the finest human beings I have ever known. I’m deeply saddened to report his passing. He fought a valiant battle till the end, and inspired all who knew him to stay positive and keep going against all odds. A dear friend, spectacular singer and performer, songwriter, and lead singer in the “version 2” Talas - actually version 7 or 8–as we were just completing a new record together, we found out the situation. Phil fought like a champion and brilliantly performed and completed vocals for the album, in spite of shouldering the knowledge that he was in a serious health situation. On behalf of myself and all who were lucky enough to know him, I wish him peace for all eternity, and thank him for sharing his life, love, friendship and talent with the world. God bless you, Phil. Rest in peace dear friend. We will meet again. My deepest condolences to his wonderful family, his dear sweet Mom, and his two sons."

Born and raised in Rochester, NY, Naro moved to Toronto nearly three decades ago, where he raised his family and set up his base for a thriving music career. Recently he moved closer to the Buffalo/ Canada border and performs frequently in both Canada and the United States.

“I moved to Canada because my first wife was from there,” said Naro. “Soon after I moved there, I began working on the vibrant Toronto music scene. It didn’t take long before I realized it was a great place to be based; I could work in a major music market and still be close to my family in Rochester.”

After finishing school, Naro made the brave decision to only work as a full-time musician. He played in both cover and original bands before landing the gig singing with Talas. While in Talas during the 1980s, Phil enjoyed great success performing with many of the 80’s top hard rock attractions including Yngwie Malmsteen, Anthrax, White Lion, Quiet Riot, and Iron Maiden. When Talas broke up after Sheehan formed Mr. Big, Naro began a successful career as singer/guitarist both as a solo act and in a duo named The Phil & John Show.

It wasn’t long before Phil Naro became the “go-to-guy” for a number of highly successful tribute shows including Classic Albums Live, and bands performing the music of Led Zeppelin, Yes, and ELO. Said Naro: “Some people in the industry wondered why I chose to work in tribute projects when I already had a career as a national artist doing original material. The reason was simple: it kept me working six nights a week in markets like Toronto and other major cities. That was the best exercise I could give my voice. I knew years ago, if you don’t use it; you lose it.”

After working with KISS founding member Peter Criss and Canadian rockers Coney Hatch, Naro lent his powerful voice to a number of modern-day prog rock bands. He co-wrote and recorded several tracks with guitarist and founding member of The Rascals, Gene Cornish. Of those, “A Thousand Times,” appears on the new A Life In Song album.

The constant work and great reviews got Naro noticed by other music celebrities who soon wanted to work with him. In 2016, Naro helped form The Platinum Rock All-Stars, a supergroup that features drummer Vanilla Fudge/ Cactus/ Jeff Beck drummer Carmine Appice; Sons Of Apollo, ASIA, ex-Guns N Roses guitarist Ron Bumblefoot Thal; bassist Tony Franklin (ex-Whitesnake, The Firm); and YES / ASIA/ Buggles keyboardist Geoff Downes. “We have only played a handful of shows together because of everyone’s hectic schedule,” said Naro, “but I really love working in the All Stars. Collectively the members have sold something like 130 million records, and we play all the hits of the groups that they came from. On stage, we have a blast and so does the audience.”