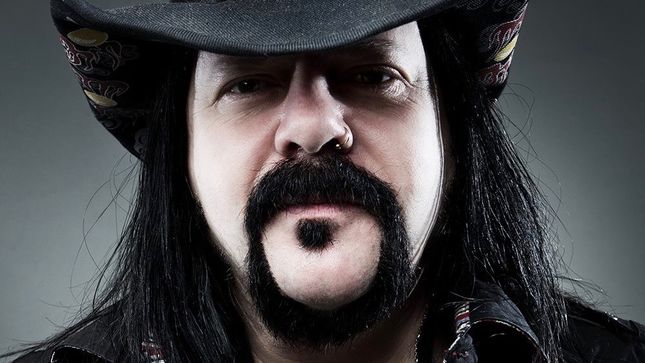 TMZ is reporting that Vinnie Paul is going to be laid to rest in his forever hardware, identical to that of his late bandmate and brother... courtesy of none other than Gene Simmons and Paul Stanley.

Says TMZ: "Sources close to Vinnie's family tell TMZ that the recently deceased musician and Pantera co-founder will be buried in a custom KISS casket provided by Simmons and co. We're told the casket was offered as a gift at Vinnie's family's request. His brother, "Dimebag" Darrell Abbott was buried in the original prototype in 2004 after his untimely death.

"Vinnie will also be buried in some of his clothes - including his hat, shoes and flannel... among other items. We're told Vinnie will be put into the ground Saturday at the same cemetery in Arlington, TX, where Darrell and his mom lie."

The official Pantera Facebook page has announced A Public Celebration Of Life event for Vinnie Paul.

The event will take place on July 1st at 3:33 PM at The Bomb Factory in Dallas, TX. There are no advance tickets, lines, or lists. The line for wristbands to the event will begin 12 PM on the day of the event.

Las Vegas Review-Journal columnist John Katsilometes reports that the death of Vinnie Paul “did not appear suspicious” according to the official report of the event recorded by Metropolitan Police officers.

According to records of the event, officers were dispatched to a dead-body call at 5:41 PM on Friday (June 22nd) on the 6900 block of Procyon Street (Paul lived on Procyon). Medical personnel were summoned, and Paul was pronounced dead at the scene.

Metro spokeswoman Laura Meltzer added that responding officers did not take such further action as calling homicide detectives to the scene, further indication that Paul was considered medically deceased.

The Clark County coroner’s office has since picked up the investigation into the cause and manner of Paul’s death. The founder of the bands Pantera and Hellyeah died at age 54. Clark County spokesman Dan Kulin said today that official cause of Paul’s death is still pending and would likely take several days to be issued.