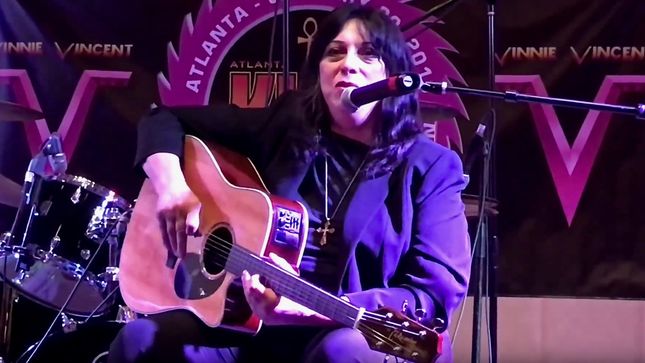 KISS guitarist Vinnie Vincent will perform his first concert in 30 years, on December 7th in Memphis, Tennessee. Billed as "The Songs. The Music. The Stories: Vinnie Vincent Live In Concert", the show will feature an acoustic evening of KISS and Vinnie Vincent Invasion songs.

Vincent, back in the public eye after a 20 year absence, will be on-hand for a signing/photo session with fans. He’ll also appear onstage for an in-depth discussion about the making of KISS’ 1983 Lick It Up album; notable due to Vincent’s eight co-writes on the album. The on-stage panel will be moderated by Chris Czynszak and Aaron Camaro of the Decibel Geek podcast.

Welch, now in his fifth year after rejoining his Korn bandmates, will be appearing for a signing session as well as an on-stage panel discussion to promote his new documentary Loud Krazy Love, which chronicles his life changes during the period away from the nu-metal pioneers. The on-stage panel will be moderated by Joshua Toomey of the Talk Toomey podcast.

Now in its second year, the Nashville Rock n Pod Expo is a one-day event that celebrates all things rock music and podcasting.

With radio continuing to ignore new talent and focus solely on a handful of tracks from classic rock artists, rock podcasting has become a welcome promotional avenue for artists in the genre. What started as a hobby for many of these shows has become a legitimate media platform for promoting rock music. The combined reach of the over 25 participating podcasts numbers in the tens of thousands and downloads exceed ten million.

Another feature of the Nashville Rock n Pod Expo will be vinyl/memorabilia selling the best in rock merchandise as well as a Rock n Pod Museum displaying stage-played gear from notable rock and metal musicians.