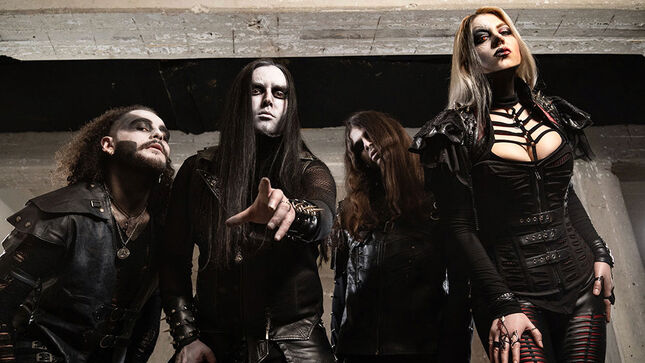 Uniting the brutal with the catchy and drenching it in orchestrations that only serve to expand its epic scale, Colosseum is a thrilling, gripping listen with each of its nine tracks playing an important part in the album as a whole, making it clear that W.E.B. stands toe-to-toe with anyone in their genre.

W.E.B.'s Colosseum will be available on CD, Fruit Punch-colored LP, and digital formats. Find pre-ordering options at this location. The cover art and tracklisting are as follows:

In titling the record Colosseum, W.E.B. draw comparisons with the past and present, in typically brutal style. "The Colosseum was the famous gigantic arena in Rome to give the people 'food and spectacle,' whereas what it truly did was to quench the mob's thirst for blood and violence and keep their minds away from thinking; kind of an ancient TV-brainwash machine," notes Sakis. "People nowadays seem to be thirsty for blood more than ever. They seek violence in almost everything. You can see it in social media, in the streets - even a simple fight between kids in a schoolyard attracts the other kids, not to separate but to watch. Humans miss the Colosseum and what it gave to their violent nature, even though they will never admit it. The title Colosseum is the irony of giving them what they secretly desire. Maybe then they will start to understand what they see in their mirror and hopefully it will bother them."

Colosseum was recorded, mixed, and mastered in Sound Abuse Production Studio in Athens by Psychon and produced by Sakis Prekas. While Sakis admits it was the most difficult record they've ever made, it was also the smoothest of all recording sessions, largely due to being so prepared. "It also had to do a lot with the chemistry between us and the way Psychon works with us: keeping the recordings on a strict schedule, and at the same time making us always feel comfortable to express ourselves."

Still, there were obstacles to overcome when it came to orchestrations and arrangements. "When you enter the rabbit-hole of symphonic orchestra and synths, you are in a chaos of sounds, and new ideas are always born through this. We had to spend hours on sound design and decisions like never before, yet the outcome speaks for itself."