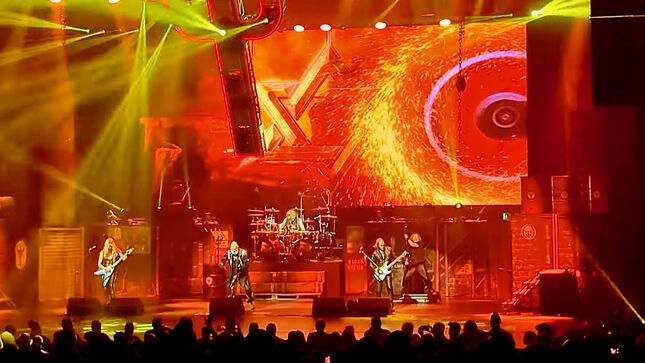 Last night, Thursday, October 14, Judas Priest launched the next leg of their 50 Heavy Metal Years tour in Wallingford, CT. During their set, the band performed the Sad Wings Of Destiny album track, "Genocide", for the first time since October, 1982. Fan-filmed video can be viewed below:

Next month, Judas Priest will be inducted into the Rock And Roll Hall Of Fame in the "Musical Excellence" category. The 37th Annual Rock & Roll Hall Of Fame Induction Ceremony takes place on Saturday, November 5, at 8 PM, PST at Microsoft Theater in Los Angeles, California. The Ceremony will air at a later date on HBO and stream on HBO Max alongside a radio simulcast on SiriusXM’s Rock & Roll Hall of Fame Radio channel 310 and Volume channel 106.

Judas Priest's team have been in touch with former guitarist K.K. Downing and former drummer Les Binks - both of whom are also being inducted - and Rob Halford tells Ultimate Classic Rock, "everybody's been very cool and agreeing. There's just been [an attitude of], 'Let's just relish this opportunity and jam and put everything on 11.'"

Neither Halford nor Judas Priest's representatives could confirm yet whether Downing or Binks will be joining the band onstage during its Rock Hall performance, but Halford says both former members will be involved in some capacity, as well as late drummer and fellow inductee Dave Holland.

"We are gonna play live because there is all this roar: How are we gonna do it? Because we want to try and make the best things happen," the singer says. "So the best things to happen are to bring in all of the people that are included in the induction — which includes, obviously, K.K. and Les, and Dave. So, we've been able to work things out, so we will be playing live. We've got, like, eight minutes and 24 seconds and a half-second to play live."

He says, "We've got a couple of cool things that are gonna take place on the night that will be held under wraps like most people do because you don't want to give everything away. But yeah, look: A bunch of guys from the U.K., from the West Midlands, a Birmingham band of heavy metal, is being inducted into this great institution. So we're gonna make the most of it and have a great night out and live a lot of metal memories."

"Naturally, it's a super honor," says Travis. "I always felt that Priest would get in eventually, only because you can't have something called the Rock And Roll Hall Of Fame and not have Judas Priest in it. So there were a couple of events prior to this year where we were nominated, I think that's the right word, I'm not sure... but we were in the running. And we didn't quite get in, but I was always confident. Priest will get in eventually, and same thing with some of the bands that aren't in yet, they will get in. But yeah, it's a super honour. There's not much else you can say about it, really. It's pretty cool."

Asked if the band will be performing at the ceremony, Travis reveals: "Yeah, we are. They give you a limited amount of time 'cause there's obviously lots of artists that are gonna be performing. So they gave us a set amount of time to perform. And we decided we're gonna try and work in,l ike a medley and do some of the Priest classics and put 'em all into a medley, which we've never done before. So it should be interesting."