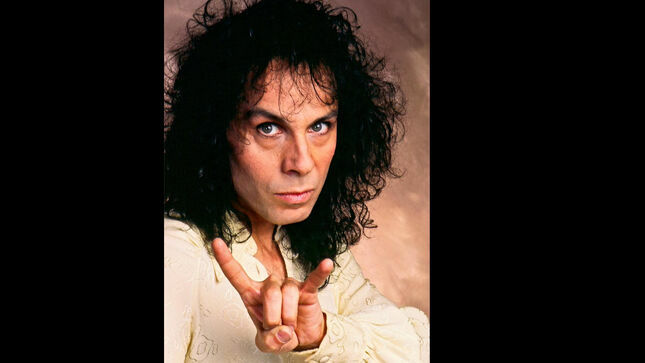 Speaking to Audio Ink Radio , Wendy Dio spoke about Ronnie James Dio’s new autobiography, Rainbow In The Dark, and if there is any unreleased Dio material.

On the subject of unreleased music, Wendy said: “There is some stuff; yes. Definitely. I’ve been looking at that. I’m working with Wyn Davis, who’s Ronnie’s engineer on that, to use his ears to see if these things are up to Ronnie’s standard to be able to put out or not… I knew there are three songs, yes. There is other stuff. There’s a lot of unreleased live stuff that was done in many different places, so it’s going through all that and updating it and making sure it doesn’t disintegrate, because some of this stuff is old and on a big two-inch reel, so we have to get it back up to today’s standards so it doesn’t disintegrate. So, I’m working on that right now.”

The long-awaited autobiography from heavy metal music icon, Ronnie James Dio, the powerhouse voice of Elf, Ritchie Blackmore’s Rainbow, Black Sabbath and his long-time bespoke band Dio, was released on July 27 by Permuted Press in the US and Canada and Constable in the UK. Co-written with British music journalist Mick Wall and Dio’s widow and long-time manager Wendy Dio, Rainbow In The Dark: The Autobiography is now available.

Wendy Dio spoke with Junkman to discuss the book, and during the conversation she revealed how the manuscript was completed after Ronnie's death.

Wendy: "I had a book deal for Ronnie when he was still alive, but then we kind of put it aside. It's hard to go down all those memories and stuff, and then Mick Wall kept prodding me and prodding me. He knew Ronnie very well. He'd become a friend over the years and he kept prodding me, and he said, 'C'mon, we've gotta do this.' So, a couple of years ago we decided, 'Okay, let's go for it, let's start doing it...' but I wanted it written in Ronnie's own words. Fortunately, Ronnie's mother had a scrapbook with every interview Ronnie had ever done, and we went through a bunch of stuff and picked out things that was carrying on with his life during those times. But it was things that Ronnie still said in interviews. We put that all together, and then memories of mine that came up at that time."

In an exclusive excerpt from Rolling Stone, Dio recounts how Sharon Osbourne introduced him to Black Sabbath guitarist Tony Iommi and reveals the doubts he had initially about replacing Ozzy Osbourne. But at the same time, he remembers the excitement he felt about starting a new chapter for the iconic band with a song that would later appear on 1980’s platinum success, Heaven And Hell.

Read a portion below...

Wendy, meanwhile, had struck up a friendship with Sharon Arden, soon to become Sharon Osbourne. Sharon was working for her father, Don Arden, one of the most fearsome managers in the music business. In the UK, Don was known as Mr. Big. Don had mob connections he liked to boast of, liked it to be known he carried a gun, and had various expressions he liked to employ such as, “Legs do break.” Especially so, the implication was, if you were ever foolish enough to cross Don.

Don made his money managing artists as diverse as Little Richard, Gene Vincent, the Animals, the Small Faces, ELO, and now Black Sabbath, to name just a few. He was so rich he lived in a vast Beverly Hills mansion once owned by Howard Hughes. Living with Don at the mansion was Sharon. It was through Wendy’s connection with Sharon that I got invited over to meet the Sabbath guys. It was all very nice and polite, and when we left, I thought no more of it. They were getting ready to make their next album with Ozzy and I was still thinking about my own next move.

Then fate took a hand in things. I was at the Rainbow one night when Sabbath’s tall brooding guitarist Tony Iommi walked in. I liked Tony right away. I knew he was the musical leader of Sabbath, the mastermind behind some of the most classic guitar riffs in the history of rock. We got to talking and it turned out that we were both contemplating solo albums. Tony confided that the band had just kicked Ozzy out. Ozzy has been the first to admit that he was his own worst enemy in those days, at a time when his drinking and drugging were completely out of control. He was hardly the only rock star to suffer that fate. Tony explained that the band’s bassist and usual lyricist Terry “Geezer” Butler was also going through some family issues. Hence Tony’s inclination to consider some sort of solo project.

I was all about experimenting with ideas at that point and suggested a possible collaboration. Maybe. One day. Maybe not. No biggie. Next thing I knew I was riding in the back of Tony’s limo to a studio in L.A. where Tony had this “idea for a song” he wanted to play me but that he was having trouble finishing without a vocalist and some lyrics. When he pressed play on the console, I could not believe my ears! This was no off-the-cuff idea that still needed a ton of work. This was a fully-fledged Sabbath behemoth!

The full excerpt from Rainbow In The Dark: The Autobiography can be found at Rolling Stone.

Ronnie James Dio had begun writing the manuscript several years before being diagnosed with cancer. Born in Portsmouth, New Hampshire and raised in an Italian-American family in the upstate New York town of Cortland, his journey to international fame was hardly pre-ordained. He first began playing trumpet and then guitar and bass in local bands at parties, bars and clubs while still in high school, surviving life-changing setbacks--among them the loss of his bandmate and best friend in a car accident that put his own life in jeopardy. These events only made him more focused and determined to succeed. He documents how he evolved from sideman into singer and frontman to not one, but three, internationally-renowned multi-Platinum-selling bands, playing on the world’s most hallowed stages, among them London’s Hammersmith Odeon, Tokyo’s Budokan, The Forum in his ultimate hometown of Los Angeles, and the arena that represented, for him, the pinnacle of success - New York’s Madison Square Garden, where this book begins and ends.

Ronnie James Dio weaves his tale of tenacity, tragedy and triumph in a chatty conversational style, easily moving through the sudden transition that put him front and center behind a microphone; the luck that led to the formation of Rainbow and a productive, but difficult, collaboration with guitarist Ritchie Blackmore; the chance meeting with Black Sabbath guitarist Tony Iommi that made him the second singer to front the venerable band, taking them to new levels of international success; his marriage to Wendy, who became his manager and true partner and the huge gamble they took together to launch the most successful endeavor of his career… his own band, Dio. He explains how the “Devil Horns” (or maloik), something his grandmother taught him would provide protection from the “evil eye,” became his personal calling card and an enduring symbol of heavy metal for fans around the globe.

Ronnie writes candidly about the many excesses of the rock ’n’ roll life, how his masterful songwriting skills were born of necessity and the number of times he was forced to rethink his career path, always confidently clinging to the dream that propelled him forward. He talks throughout the book about his love for his loyal fans, for whom his consideration led to countless hours of signing autographs and posing for photos so that no one would be left feeling disappointed. “He possessed one of the greatest voices in all of heavy metal, and had a heart to match it,” said Twisted Sister guitarist Jay Jay French at the time of Dio’s passing. “He was the nicest, classiest person you would ever want to meet.” 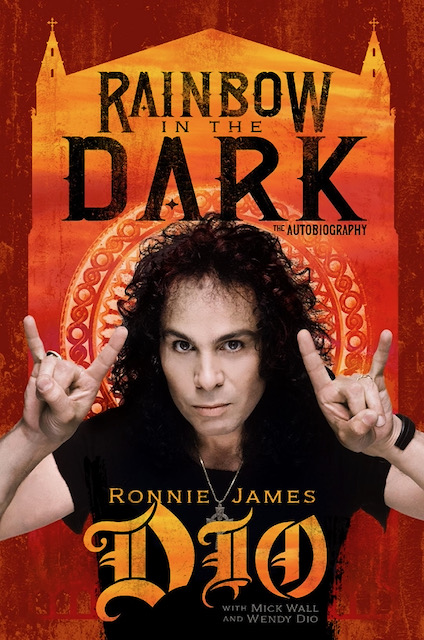 Rainbow In The Dark: The Autobiography is illustrated throughout with photographs, largely never-before-seen, derived from family photo albums and personal archives, plus an eight-page color insert devoted to additional rare photographs from Ronnie's life and career.

To bring the book to completion, Wendy Dio, whom Ronnie met in 1975, married in 1978 and became his manager following his painful departure from Rainbow, fleshed out certain unfinished sections with additional details and her own observations of specific events covered in the book. Over the past 30 years, Wendy Dio has been involved in many aspects of the music business, receiving awards for stage set design and concert video production, along with serving as executive producer on numerous Gold and Platinum albums. In 2010, she co-founded the Ronnie James Dio Stand Up and Shout Cancer Fund (www.diocancerfund.org) in Ronnie’s memory, which has gone on to raise over $2,000,000 for cancer research, education and early detection screenings.  She worked with esteemed British music journalist and author Mick Wall, who, as a rock music writer for publications such as Classic Rock, Mojo, The Times and a variety of others, had interviewed Ronnie countless times, to finalize the manuscript. In addition to writing for many of the UK’s major music publications, Wall has produced award-winning television and radio documentaries and has written biographies of musicians and bands, among them When Giants Walked the Earth: A Biography of Led Zeppelin and Two Riders Were Approaching: The Life & Death of Jimi Hendrix.

To celebrate the publication of the book, Wendy Dio will participate in an hour-long LiveSigning.com event produced by Premiere Collectibles on Wednesday, July 28 beginning at 3 PM (Eastern time). Those who have pre-ordered the book at premierecollectibles.com/dio will have the opportunity to submit questions in advance for Wendy to answer during the event, which will stream live via the Ronnie James Dio Facebook page, here.

Rainbow In The Dark: The Autobiography will be available at amazon.com, barnesandnoble.com or wherever books are sold.