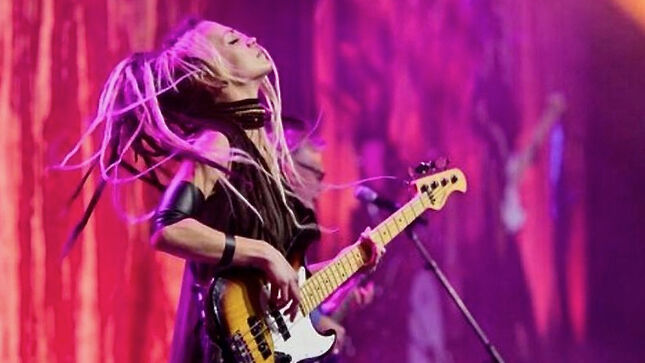 New Whitesnake bassist Tanya O’Callaghan was interviewed by Antihero Magazine to talk about her new gig, solo music, playing with Dee Snider and Steven Adler, and if Whitesnake will continue after their farewell tour.

When asked if she’ll be part of Whitesnake after the tour and if she’ll be involved with new Whitesnake music, she said, “It’s one the things [David Coverdale, frontman] asked me. So obviously, can't predict when or what it is, but, yeah. He fully intends to retire from touring, but then, he's just such a song machine.

“The lineup that's there has written with him, and he, yeah, he absolutely mentioned studios. So, that would be fantastic. Obviously, it would be an honour to throw down some studio tracks with him. That would be amazing. So, I can definitely see that happening, which would be great.”

David Coverdale has revealed that Whiteshake are planning “a very special project” to coincide with the band’s farewell tour, which kicks off in spring 2022. The Whitesnake leader also said that there is little chance of John Sykes appearing with the band, even in a one-off capacity during the tour. Coverdale made the comments while speaking to eonmusic about the band’s just-released 25th Anniversary Edition of Restless Heart.

Speaking to Eamon O’Neill about the farewell dates which kick off in Dublin on May 10, Coverdale said; “We have this farewell tour, and when I say that I'm retiring, I’m retiring from touring at this level. It's so huge and it takes months and months and months to set up. I was hoping actually, to retire at 69 which is absolutely the best age for the lead singer of Whitesnake to step down."

He continued; “I have to do this tour of appreciation and gratitude so I can achieve completion. I’m coming up to fifty years of people supporting my work; it's just extraordinary, it's a magical life and as the song ‘Don't Fade Away’ says; “all in all, it's been a rocky road”,  but we’ve still got the passion to move forward."

It was then that the former Deep Purple man revealed that he’s planning something special to accompany the tour. Said David; “We have, next year a very special project for spring which I can't talk about - that's going to be a nice surprise for people to accompany the world farewell tour. When this was signed, sealed, delivered, we said; “I don’t think we can just put a box set out, it’s my farewell tour”, so we’ve worked on a very special project to accompany the tour. It’s not a box, but it’s a really great project."

Elsewhere, Coverdale admitted that there is little chance of seeing John Sykes on stage with Whitesnake again. When asked if there was perhaps, some unfinished business between the pair, he replied: “Not for me. I admire John, I wish him well in everything, but it was interesting that we were so successful in writing together, so successful, but as people we weren’t. There was a constant rub."

Expanding, he shared that efforts to reunite the pair were made in in 2002, but ultimately came to nothing; “A mutual friend put us together in, I think it was ’02 or something like that”, he said, “and we talked and stuff for a long time and it was lovely, but the more and more I spoke with him I thought; “I feel the same as it was thirty-odd years ago, and the last thing I want to do is make a commitment, and then be calling my wife from Tokyo saying; “what the fuck did I agree to this for?”

Finally, he explained; “When we lost Jon Lord, I reached out to a lot of people - including Richie [Blackmore], god bless him - to bury whatever potential hatchet, and I put out feelers, and it wasn’t particularly positively received, so what I can tell you is I wish everyone well who I’ve worked with, because they all brought something amazing to the party."

Read the entire interview at eonmusic, where David talks about Restless Heart, the passing of Tawny Kitaen, working with Adrian Vandenberg and Vivian Campbell, and more.

In November 2021, it was announced that Whitesnake had parted ways with bassist Michael Devin, who joined in 2010, with frontman David Coverdale stating: "We all wish Michael every success in his life & all his endeavours. We sincerely thank him for being part of our journey & for all his exceptional gifts he brought to Whitesnake."

Whitesnake then confirmed they have secured a new bassist, issuing the following update:

"Well, well, well… Ladies & Gentlemen… Boys & Girls… We are very proud to announce & to introduce you all to our newest Snake… or should I say… SNAKETTE!!! Please give a LOUD Whitesnake Choir welcome to The Irish Tornado!

A whirling dervish of a performer whom we feel will bring a fresh, new, exciting musicality & welcome energy to the band, both in the studio & onstage… here she is… Irish born & bred… the one & only… Tanya O’Callaghan!!!

David Coverdale adds: “For whatever reason, Whitesnake has never featured a female musician in the band before… Bad Boys!!!… But, when we saw Tanya performing with our friend Stephen Adler’s band at the M3 festival in 2019 & we were all blown away… An electrifying performer… When Whitesnake & Michael Devin decided to go their separate ways, Tanya was the first person we reached out to & thankfully she accepted our invitation to become a Snake… We are thrilled & delighted to welcome Tanya O’Callaghan to Whitesnake!! Let the music do the talking!!!"

Check out Tanya’s site here, and get more background here.