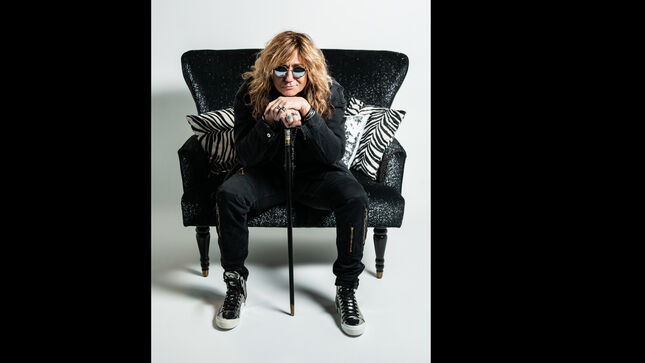 David shares candid insights into his personal life with Ganbarg: how he got started as a music student and his inspiration as a teenager growing up in Yorkshire England, listening to American R&B/Soul from Sly Stone to Stevie Wonder to Donny Hathaway.

Answering an ad in Melody Maker at the young age of 21, he was instantly thrust into the global spotlight becoming the new lead singer for Deep Purple at the height of their success. After Deep Purple disbanded, David went solo, eventually forming Whitesnake in 1978. Between 1978 – 1990, Whitesnake released eight studio albums which have sold in excess of 18 million copies worldwide. The band’s songs and videos, including “Here I Go Again,” “Still Of The Night,” and “Is This Love” (a song Coverdale originally intended for Tina Turner), were inescapable on the radio and on the airwaves of MTV.

In 1993, Coverdale teamed with Led Zeppelin’s Jimmy Page for the platinum-selling album, Coverdale-Page.

David is currently on the Farewell Whitesnake tour in Europe and the US, and has just released a remastered Whitesnake Greatest Hits collection, released digitally and physical on 2LP, CD and CD/Blue Ray configurations. Coverdale also enthusiastically discusses with Ganbarg his plan in the works to remix and remaster the Paige/Coverdale album from each of their perspectives.

A convivial speaker, Coverdale speaks animatedly about his 50 years in rock & roll, his keen presence on social media, and how his work with music is most definitely not yet complete.

Find links to the podcast here.

Rock& Roll High School podcast is hosted by two-time Grammy Award winning producer and Atlantic Records President of A&R Pete Ganbarg who takes us to school, conducting in-depth interviews with some of the most legendary figures in the history of contemporary music.

Rock & Roll High School was born from Ganbarg’s desire to teach a weekly rock ‘n’ roll history class to his A&R team at Atlantic Records, educating them about music history so they had a broader understanding of contemporary music’s past when looking for future talent. This idea led to more frequent meetings in 2019 and then to zoom meetings during the pandemic to include the entire Warner Music Group staff. Ganbarg stretched the idea even further, inviting music icons for in-person and recorded interviews. Ganbarg references both the television show “Inside the Actor’s Studio” and record industry stalwart Joe Smith’s “Off the Record” as inspirations. “Off the Record” is an oral history based on 238 hours of conversations the former president of Capitol and Warner Bros. Records recorded with music industry luminaries (now housed at the Library of Congress).

Rock & Roll High School offers down-to-earth and revealing conversations about how these legends got their first break, handled turning points in their careers, and so much more.

Ganbarg says: “It’s been an honor and absolute thrill to sit down with each of these incredibly influential and uniquely talented individuals and really dive deep into their remarkable careers. I’m personally such a fan and I am excited to bring these conversations to more fans around the world. Everyone recognizes these superstars and their hits which have defined generations, but now we get to pull back the curtain and take a closer, more intimate look at the stories behind the music.”

New episodes launch every other Thursday and are available to stream everywhere.