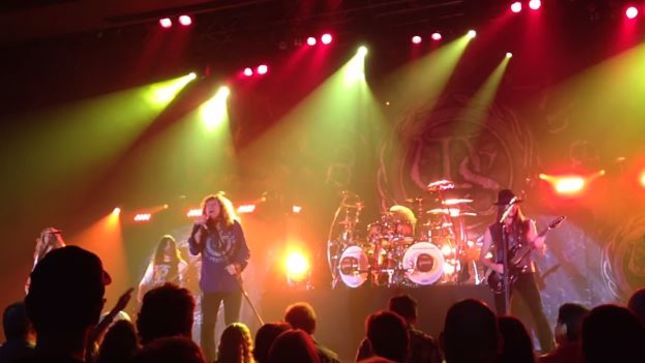 The band played the following songs:

“You Fool No One” (Deep Purple cover)

“Still Of The Night”

Fan-filmed footage can be seen below.

“You Keep On Moving”:

Whitesnake continue to show why they are a musical force to be reckoned with. The Purple Album was released last week and has stormed the charts around the globe.

"The Snakes & I are thrilled with the incredibly positive response to The Purple Album. Our sincere thanks to ALL for the amazing support we're receiving for the album & The Purple Tour!!”, exclaims David Coverdale.

“You Fool No One (interpolating Itchy Fingers)

“You Keep On Moving

“Lay Down Stay Down

Purple Album Behind The Scenes

“Lay Down Stay Down”:

Whitesnake are currently on the road on a headlining world tour. Confirmed dates can be seen below:

‎Def Leppard and Whitesnake have announce a joint headline UK and Irish arena tour with support from Black Star Riders.

“I am very excited to be working with Whitesnake again; we had such a wonderful time when we did it back in 2008," says Def Leppard frontman Joe Elliott. "It’s a great experience for rock fans to be able to see two great live bands on the same stage on the same night."