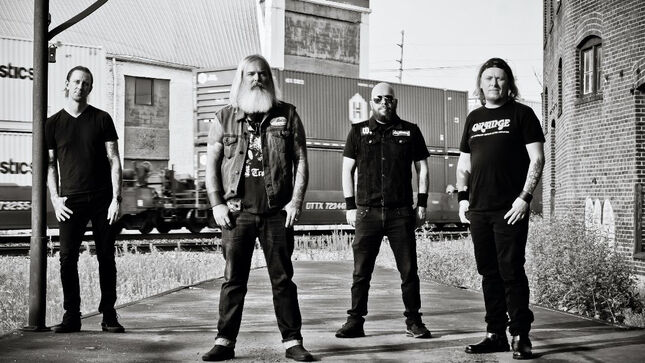 Richmond, Indiana’s Wolftooth will release their colossal new Napalm Records debut, Blood & Iron, this Friday, December 3. Offering an immense slab of proto-metal influenced heaviness with a deep dose of doom essence and addictive stoner riffage, the album travels through a treasure trove of fantasy-themed lyrical influences - exploring mystical and often treacherous themes of mythology, lore and legend with a focus on sorcery, battle and non-stop adventure.

Following the release of charging previous singles “The Voyage” and "Broken Sword", Wolftooth have just revealed yet another gritty single, this time in the form of anthemic stoner metal-infused burner "Ahab". Accompanied by a naturally nautical lyric video, the track impresses from start to finish with an almost psychedelic intertwining of haunting guitar melodies, glorious vocals and winding riffage.

Wolftooth says about “Ahab”: “'Ahab' is a song about revenge and the consequences of achieving it. A classic story of a man's obsession that leads to his own demise. Sonically, the song stays true to our roots. It's a Sabbathian tribute to the music we grew up on."

Wolftooth launched onto the scene in 2017, swiftly grabbing the attention of fans, tastemakers and industry alike. Now, building upon the subterranean success of their lauded previous albums (2018’s Wolftooth and 2020’s Valhalla), the band unveils Blood & Iron, a true nod to classic, feel-good American heavy metal with modernized flair. If you enjoy your metal homegrown, larger-than-life and with a weighty dose of mystical storytelling.

Recorded, mixed and mastered by producer Jeremy Lovins, Blood & Iron begins ominously with “Ahab” - beckoning the listener to join Wolftooth’s fabled trek with an isolated guitar introduction before bursting into a sticky, metallic blues jam, instantly echoing the likes of Black Sabbath to Pallbearer while maintaining fresh delivery. The track effectively poises the album for greatness before leading into two tales of historic prevalence backed by trudging riffage - Xerces epic “Hellespont”, and mythical ode to triumphant Irish warrior Cú Chulainn, “Blood & Iron”. The tracks ebb and flow amid melodic solos, sludgy rhythms and charging drums, evident on songs like galloping, thrash-injected assault “Broken Sword” and headbang-inducing, lead-laden “A King’s Land”. Wolftooth continue their immense sonic storytelling with soaring saga “The Voyage” and frigid ballad “Winter White” before closing out the nine enormous tunes on Blood & Iron with two of its most standout offerings – cohesive and rhythmically-enticing “Garden Of Hesperides” and driving final epic “The Mare” - depicting stories of 100-headed dragons, witches, dark horses and mind control. What more could a true metalhead ask for?