ZAKK WYLDE Talks Working With Guitarist DARIO LORINA On BLACK LABEL SOCIETY's Doom Crew Inc. - "He's All Over The Record, It's Not Just Me This Time" 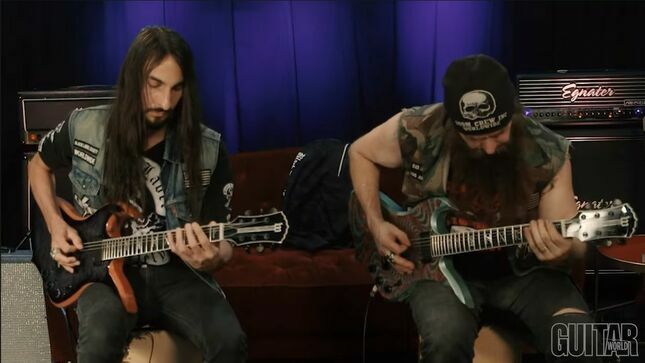 Black Label Society will release their eleventh studio album, Doom Crew Inc., on November 26th, 2021 via Entertainment One (eOne). Frontman / founder Zakk Wylde and second guitarist Dario Lorina recently spoke with Guitar World about the record. Following is an excerpt from the interview.

Guitar World: Black Label Society, at least in the studio, has always been a one-man-operation when it comes to the guitars. What made you decide to bring Dario into the recording process this time?

Wylde: “He’s an amazing player, and there’s just more that we can do together. When you have a real two-guitar-player band like the Allman Brothers or Judas Priest, you can do those harmonies. And not only that – Dario can shred. So it’s just like, ‘Why don’t you do a solo here?’ It’s like Night Ranger, where you have Jeff (Watson) and Brad (Gillis), and they’re doing harmonies together, but at the same time, they’re both shredding all over the records. That’s where we’re at now. So having Dario in the band is awesome. That’s why I said we have to make sure Dario is included on the cover of the magazine. Because he’s all over the record. It’s not just me this time.”

Guitar World: That back-and-forth thing is all over Doom Crew Inc., with you guys trading solos in a headcutting style. A good example would be on the first single, "Set You Free". Were your parts worked out separate from one another, or were you improvising together?

Wylde: “For a lot of the solos I actually wrote out the whole thing. The 'Set You Free' one, that was completely constructed, and it was recorded with just me soloing. And I really dug the way it came out. But it was long enough where I just went, ‘Dario, you play this part, I’ll play this part and then at the end of it we’ll do that pentatonic lick together.’ So we sent the track from the Vatican over to his studio, the Dark Chapel (Lorina’s home studio in Las Vegas), and 10 minutes later Dario sent it back. And we were like “Slamming. Great. Done.”