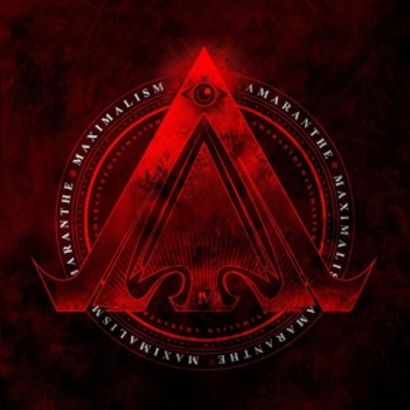 The first draft of this review was a pissed-off kneejerk reaction to what I initially interpreted as pop metal guardians Amaranthe trying to suck the marrow out of the success they had with “Drop Dead Cynical” from their previous album, Massive Addictive. After weeks of listening to Maximalism, I decided the record is instead about contrasts, thus giving fans an even bigger pop experience than ever before, while getting heavier and more innovative at the same time.

Things start off well enough with “Maximize” but as of the second track in, “Boomerang”, things get uncomfortable beginning with a chorus that screams of the Dead Or Alive über-classic “You Spin Me Round”. It’s followed by the Queen trademarked clap-clap-thump of “We Will Rock You” as the “backbone” for first single “That Song” (the album’s low low point), followed-up with the “Drop Dead Cynical” rip-off “21”. Three head-scratchers in a row aren’t made any easier to swallow when bookended by “On The Rocks”, a party anthem that’s only one Randall Amp away from being a Ke$ha tune even though vocalist Elize Ryd is pretty entertaining.

In a bizarre twist mid-way through Maximalism, Amaranthe blast a hole through the ceiling with “Fury” featuring Henrik Englund leading the charge and spitting venom for miles; the man’s growls are melodic death metal gold. We’re going to assume Ryd’s tip of the hat to Rihanna’s “Umbrella” in the same song is a well-placed joke. “Faster” and “Break Down And Cry” in particular recall The Nexus album’s best heavy moments, and “Supersonic” comes off as Maximalism’s most impressive track with some whacked-out(standing) Queen-esque vocal arrangements on top of the band’s trademark up-tempo delivery. “Fireball”, much like “Maximize”, is a safe Amaranthe song that displeases only those who hate the band. The album closes with an Elize Ryd solo spot on “Endlessly”, which sounds like something Disney would gladly pay a cool billion to Celine Dion to record for one of their animated films.

The big draw for Amaranthe at the start of their career was their three vocalist attack, which is somewhat stifled on Maximalism. Jake E. seems to plays a reduced role on the record, used mainly for clean harmonies alongside Ryd (although he shines on “Break Down And Cry”), while Englund has been given a lot more room to extend his claws compared to Massive Addictive. As the aforementioned contrasts go, there has always been an electronica / trance vibe to Amaranthe’s sound, but it’s gone a bit too far when the vocals get the very unnecessary cyber-tweak treatment here and there and there (these folks can sing, after all); meanwhile, Olof Mörck’s guitar solos are as lush and organic as one can get. The end result is an album that is both the heaviest and pop-tastic of Amaranthe’s career.

Maximalism will definitely polarize the Amaranthe fanbase but in the end it will be a successful outing, particularly when the band brings the new music on the road. Personal experience has taught that regardless of what was laid down in the studio, Amaranthe’s music takes on a volatile new life on stage, leaving even the haters pasted to the back wall by the time the house lights come up.

The rating would be higher if I could make peace with what amounts to a bit too much pop in the metal for my taste...