AMOTH - The Hour Of The Wolf 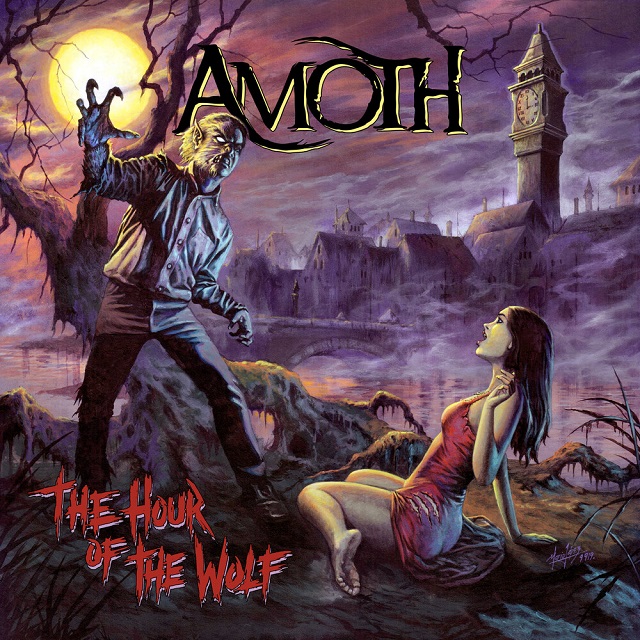 The beast is howling on Amoth’s third album, The Hour Of The Wolf. The inviting aspect of the Finland band is vocalist Pekka Montin, who gave Ensiferum a major boost on Thlassic with a distinctive, emotive, and charismatic vocal delivery. This is Pekka’s first go-around with Amoth and his engaging performance is backed up by strongly written, diverse material that should appease fans of heavy metal that glides into power and progressive territories.

The Finns keep it tight and smooth at nine tracks and 46 minutes with elements that delve into jazzy rhythms, lounge music, hard rock, and tasteful instrumentals. There’s something here for everybody, but it’s cohesive and melds together like the strongest of steels. The production is top notch with a full bass sound, guitars are distinct and powerful with a punchy drum sound.

Opener “Alice” is an example of the twists and turns presented with its fun background of the song idea being given by Alice Cooper in a dream one of the band members had. It showcases a hard rocking style, but then delves into a jazzy, slowed down area twice. The transitions aren’t clunky and are executed smoothly. The strength of The Hour Of The Wolf is there are different elements to discover and latch onto with each listen.

The melodies are tight and memorable and the duo instrumentals of “Wind Serenade Pt. 1” and “Wind Serenade Pt. II” showcase the guitar talents of Tomi Ihanamäki and Mikael Rauhala with the former is the guitar by itself with quick, almost fumbling like notes to signify a wind storm and the latter is a breezy, bluesy, jazzy song that flows by like a spring breeze. Wonderfully executed!

Looking for a more aggressive side to the band; “The Man Who Watches The World Burn” has fierce riffing and drumming and “It Ain’t Over Yet” is thrash metal like with angry lyricism that manages to drop some f-bombs. The finale and title track goes on too long, but other than that nitpick, this wolf howls mightily in its hour.