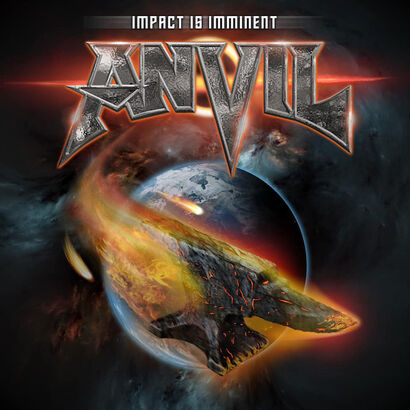 Nineteenth studio album by the Canadian metal force who have been consistently releasing albums since 1981. The core of the three piece still the same, Steve Kudlow on vocals/guitar, Robb Reiner on drums, with Chris Robertson on bass since 2014. Like Saxon, Raven, Anvil are also all about being trite and true to their roots, as evident on opening mid pace banger "Take A Lesson" and first single video track "Ghost Shadow" which burst from the speakers with urgency, tight riff and rhythm and tasty melodic solo. "Another Gun Fight" riff, bass, drum beat takes its time and crawls about during the verses. Great fun loose catchy guitars and rhythm for "Fire Rain". Riff and bass trades off during two and a half minute instrumental jam "Teabag" in the spirit of early 80s Anvil. "Don't Look Back" talks about just that, not looking back and moving ahead. Half way through, bass comes through on the up tempo "Someone To Hate", and at three minutes and thirty seconds "Bad Side of Town" like the rest of the songs up to this point gets in and out only two barely over four minutes. On the production side this album has a great balance between the guitar crunch, the clanky at times bass ("Wizard's Wand"), and punchy drums. Lead guitar melody follows a slower doomy riff on "Lockdown" about the Covid 19 pandemic. At fourteen songs its a bit long, some sameness by this point, could shave off two or three, but even by song eleven, "Explosive Energy" still maintains the interest in getting to the chorus. Anvil Is Anvil, and after all these years and albums there is still enough metal in its form to (as per the artwork) circle the planet once again.