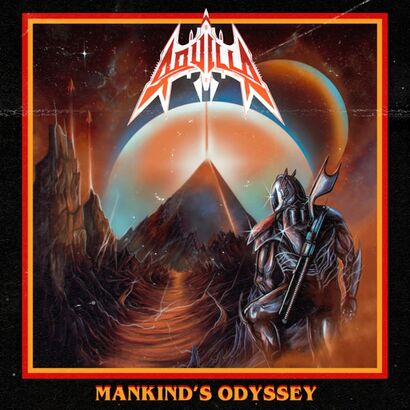 Debut from heretofore unknown Polish sci-fi obsessed, power metallers, punctuated by the falsetto vocals of the pseudonym happy Blash Raven (better than his given name: Bartosz Bereszczyński). A narrative voiceover sets the table for opening "The Arrival", which offers a speedy take on Iron Maiden riffs, but the Raven's high pitch launches this spaceship into its own high energy NWOTHM orbit. Robocop quote kicks off "Pathfinder" which also samples multiple parts of JFK's famous space race speech.

In a total mindfuck, "Scarlet Skies" begins with echoing baritone voice (think Pete Steele, spoke word), before the Raven takes flight. Musically, it's the first stab at a slower tempo, although midway through they abandon the subtleties and gallop along at a more familiar (Steve Harris inspired) pace. When not trilling, the singer recalls Zach Slaughter (Skullfist). Racing start-to-finish, a well constructed "The Awakening" vacillates between the two vocal extremes. Appropriately, "Rapt In Darkness" shifts to a more sinister/guttural throat (albeit heavily accented). Plenty of ear candy on infectious "Intersection", along with copious falsetto. Overall, this is easily the most falsetto since the last King Diamond platter. You've been warned! Headbanging "Saviors Of The Universe" is driven by guitars: the most conventional structured track. 80s synthesizer intermezzo "New Dawn Of Evadera" is a 130 second instrumental preceding the disc closing "Zero", which literally comes screaming out of the speakers, Raven's piercing tonsils, that is.

Not one for everyone, but if you can handle the nasally stratosphere scraping notes, there's an enjoyable debut encased within. Work through that thick coconut husk to get to the "sweet meat," it's worth the effort.
Mark Gromen