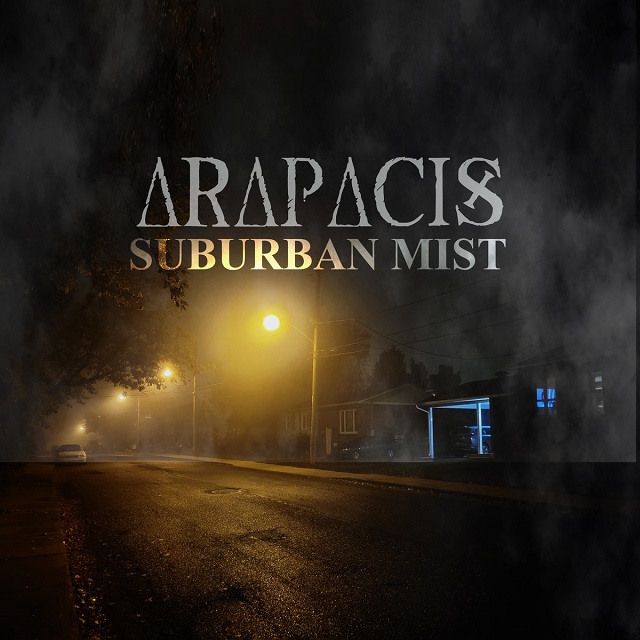 The music of Toronto’s AraPacis keeps progressing as the releases go, so their latest offering, Suburban Mist, is no exception to that rule. The songs on this album with the usual players in the band which include David Stone on keyboards (ex-Rainbow/Max Webster/Symphonic Slam), as well as an appearance by Derek Sherinian on the title track, keep to the gritty female vocals and incendiary guitar work. But the big difference here is the melodic textures blend in perfectly for an overall stark contrast from their previous releases.

Guitarist and general mastermind, Jerry Fielden, once again comes up with the perfect backdrop for front woman, Michelle Macpherson, to do her usual vocal histrionics, but this time with a clearly more delicate balance to compliment the music and get the lyrics across in a storytelling fashion, starting with the lovely “Urban Mist” as the opening number. And it’s a great way to kicks things off, including a groovy Black Sabbath “Caravan” style bit, as well as an epic guitar solo. Everything checks out from the first to the last note of the lead track including the keyboard textures, which only begs for the rest to be heard.

The second track it the title, “Suburban Mist,” and for me it’s a surprise, having heard and reviewed my share of this band’s work. I would rate this song up there with some of the more mainstream rock structured AraPacis material. And this is where Derek Sherinian is featured, with some very cool spacy keyboards, as the tracks begin to show an overall misty and moody concept in the music and lyrics. But getting back to this song, I find it to be one of the best in their catalog. Hat’s off to all from guitar and vocals to keyboards and percussion, with both delivering the icing on the cake around some more tasty soling from Fielden. Very progressive.

“Rural Mist” is where AraPacis outdo themselves with an epic western style corker, in ways unlike they’ve ever recorded. This one really gets under the skin of any fan, or I’m off my rocker. They really deliver a spooky tell-tale folk tune of sorts, which I once again tip my hat to. This is really a killer track, complete with beautiful acoustic guitar lines that interplay with a soft piano. Absolutely fantastic.

“In Hell, I’m Home” is probably the most straight forward rocker, with amazing yet simple keyboard backed riffing and lots of hot interplay between Fielden and the legendary David Stone before the vocals even kick in. And once again, Michelle Macpherson delivers a mixture of hard rocking and softer melodic vocal tones on another one of those tracks I rate up there with their best, and Gillan Macpherson-Briggs helps on backing vocals. That’s why I consider this release at the top of their catalog, with outstanding results from beginning to end.

Suburban Mist starts to wind down with another mystifying number “Cage Of Fog,” where Macpherson brings her vocal majesty down to a quiet and more comprehensive set of verses, with the usual heavier parts thrown in. This song is worth highly attributing to her great unique vocal style, and female rock and metal vocalists in general not being heard enough. You really feel her emotion throughout this entire track, as well as on several others, but she is particularly melancholy on this one.

“Unjustified” is a more keyboard driven track, with another beautiful vocal offering from Macpherson and more brilliant guitars work from Fielden. The kid of efforts both seamlessly pull off together, without an ounce of fuss and bother in the arrangement which David Stone whips away when it’s his turn to plink. And what a nice arrangement it is, which is so great to hear continued with one of the keyboard greats of my world. Note the violin on this number too, by Gwendolyne Krasnicki (also appearing on the final track). This is a tremendous piece of music full of lush tones, to say the very least about it.

“Music, You And Wine” takes the release out with the same fire that brings it in, with all points earning top marks with the rest, and David Stone adding his presence to what is already a killer number. I’m glad David Stone joined this band, and the appearance Derek Sherinian on the title track tops it off in duo keyboard fashion which perfectly compliment the blazing guitar and searing vocals. All one can do is look forward to the next release by this productive and melodically progressive heavy rock band.