BEWITCHER - Cursed Be Thy Kingdom 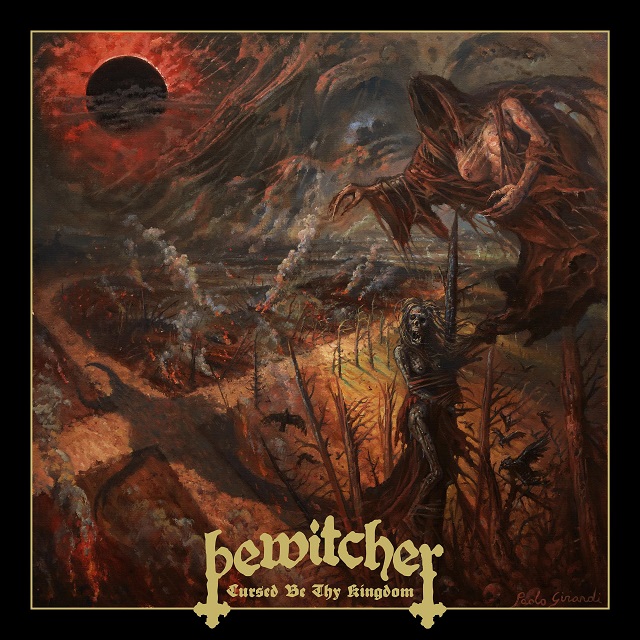 Feel sorry for bands like Betwitcher, who were just beginning to make a stink, in the music world, prior to the global pandemic shutdown. Seemingly poised to break out of the faceless underground, the Portland, Oregon trio will now be fighting for column space and "likes" alongside the plethora of sequestered acts (including the biggest names in the genre). True, that was always the case, but (especially) after this virus imposed dormancy, metalheads will surely gravitate to their "long lost favorites" before lesser-known underlings: precisely the bands who NEED an infusion of capital, tours, high profile releases, to keep them going (emotionally, financially, etc.) after a couple inactive years.

Speed, aggression and grit under the fingernails, Bewitcher don't compose music for the pretty people, preferring to not only live in the underbelly of society, but thrive in such inhospitable environs. That said, the nine hoarse, croaking vocals led tracks (opening "Ashe" is merely a 1:43 mood-setting intro) retain an infectious edge that denizens mired in musical filth rarely possess. Perhaps that's (in part) due to the simplistic, three piece construct, but there's countrified and bluesy nuisances within the black-metal-lite death & roll. Imagine Abbath's pre-solo outfit, I, with a bit more swaggering groove. Pick of the litter, "Satanic Magick Attack" seems conjured from the same primordial alchemy as Cleveland masters of grime, Midnight.

So the disc kicks off with the aforementioned instrumental introduction, an uncharacteristic acoustic guitar twang (belying their Pacific Northwest upbringing) that makes the racing "Death Returns" follow-up feel all the more vicious. There's a maniacal, head-on-a-swivel bounce to the proceedings, like odd NWOBHM infused with punk sensibilities. As with most, the raw (de)composition terminates in 3:30 or less and only two (barely) exceed five minutes. Word to the wise, keep it short, simple & rocking'. Staccato riffing "Electric Phantoms" is a whiplash inducing blazer. The conventional metal structures (including guitar break) are evident on "Mystifer (White Night City)", albeit it at an increased pace. An extra thick sputum resonates on the title track, almost thick enough to disguise the ear candy melodies.

The rare moment of deceleration (down to mid-tempo stomp), "Valley Of The Ravens", at 5:24 is the longest option. Apart from the extended guitar spotlight, it's a chip (or is that Nick?) off the old Venom block. True to its appellation, "Metal Burner" rages, start-to-finish, another nod to Athenar's clan, although Bewitcher never completely flies off the rails, vacating neither melodies, nor mental faculties. Ditto "The Widow's Blade", winding towards the album's conclusion. At 2:43, the "Sign Of The Wolf" finale is almost over before it began. Pounding speedster, with ride cymbal and snippets of Southern Rock, it bores into the subconscious after just a couple of plays. Beware!

Don't want to see these guys on a sunny, mid-day slot, at some outdoor Euro-fest. All the wrong vibe. Hope they're back, slugging it out, on a dimly lit club tour, before too much longer!