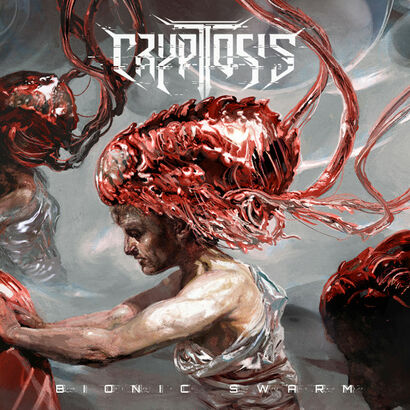 Dutch trio Cryptosis take a massive risk with their debut full-length Bionic Swarm. Releasing two albums under Distillator, the thrashers underwent a total facelift with a name change and presentation of their music. It was enough to gain Century Media’s attention and it’s apparent why. Bionic Swarm is sci-fi thrash that throws Vektor, early Voivod and Megadeth into a blender for a spellbinding trip into a dystopian future.

Serious Killing For My Business vibes in “Death Technology” as the trio tackle rhythm changes and the guitar work flies through the fretboard. Dave Mustaine would be proud. Laurens Houvast sounds possessed with his vocal work coming with a hoarse shout that teeters on the death metal spectrum. Similar to Vektor’s vocal touch, but not as high pitched. I love how he brings out a psycho mentality to Terminator like “Prospect Of Immortality”. The way he delivers “Identified, my psychosis / Sought justified death” is chilling. The guitars bring an experimenting, scientific vibe as the uneven structure makes this a highlight.

Marco Prij hammers away at the drums and his performance is worth alone to check out. Full sound with much depth and helps display the ferocity, yet creepiness of this technological realm presented. Cryptosis also utilizes a mellotron in some instances to darken the atmosphere and adds an icy touch. Bionic Swarm is like an R-Rated futuristic space movie with these guys as the soundtrack.

Ten tracks at 37 minutes, Bionic Swarm doesn’t mess around especially as they balance speed with atmosphere, like with “Game Of Souls” screeching in with fast guitars, blazing solos which then seamlessly transfers to the technological, haunting, and slow-induced “Mindscape”. It’s technical thrash and at times progressive, but without the bloated song length. Cryptosis is worth the investment; be sure to check this one out.