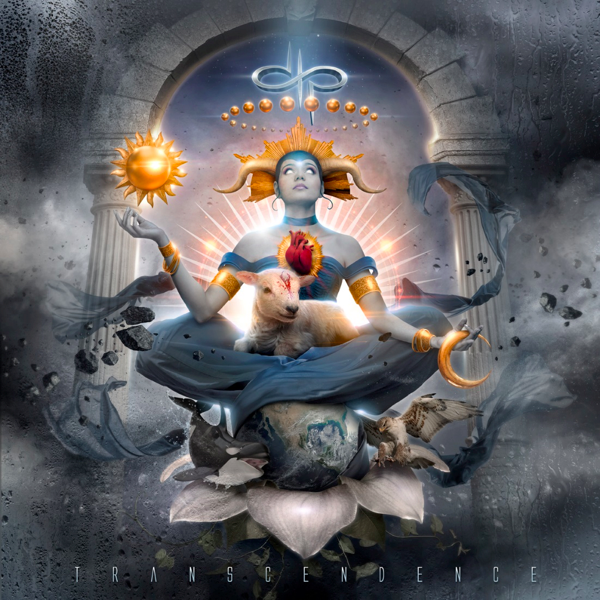 Z² from 2014 was the Devin Townsend Project's ambitious double album split into two very different sonic entities. Hardly a stretch for the man leading the charge, as Devin Townsend's 20+ year music career is based on diversity, but for some fans it fell well short of some rather high expectations. Compared to other records in the Townsend / DTP catalogue Z² was a tough listen, never quite digging in, although there are some diehard fans that no doubt absorbed every note (naturally) and have already bagged this review as bullshit (naturally). Transcendence is the Devin Townsend Project's return to form, putting things back in focus and turning in a rather prog-heavy record, opting for songs both long and short over the space of a comfortable ten tracks.

In what seems to have become a DTP tradition of covering Townsend material, Transcendence kicks off with an updated version of "Truth" from the Infinity album (released in 1998), following up what they've done previously with "Hyperdrive" and "Kingdom". From there we dive into a record reminiscent of the Epicloud album is spots with a very prominent Ocean Machine vibe all the way through. The guitar riffs and tones on "Stormbending" and "Secret Sciences" are positively fat and gorgeous, drummer Ryan van Poederooyen shines on "Failure" and "Higher" with his percussive groove madness on Transcendence's two most adventurous tracks. "Higher" also happens to be the album's prog mad centerpiece loaded with crushing guitars, some welcome metal vocal fireworks from Townsend, huge "Grace"-like melodies (see Epicloud), the song seemingly pulling itself in different directions over its nine minute run but ending things intact. The lone up-tempo song, "Offer Your Light" - Anneke van Giersbergen's in-your-face guest spot - and the "Transcendence" title track are big on Ocean Machine-ry, the latter recalling the magic of tracks like "Funeral" and "Bastard", although far more upbeat. Closing song "Transdermal Celebration" is indeed the Ween hit dressed up as a DTP tracks, and you would swear Townsend & Co. wrote it from scratch judging by how well it fits alongside the rest of the material on the album.

Much has been made of the fact that all members of the Devin Townsend Project participated in the writing of the songs for Transcendence, and if you stack the material up against Z2 and even Epicloud, it's easy to hear it did make a difference in the end. Sure, folks that can't stand Townsend's love of reverb on vocals and guitars and the kitchen sink will remain unimpressed, but those that have been on board for the long haul will agree Transcendence deserves to be at the top of the pile with previous DTP outings like Addicted and Deconstruction.

As a bloated footnote, fans with the extra pocket money should treat themselves to the special edition of Transcendence, which features an 11 song bonus disc. As far as musical direction the tracks are kinda all over the place, many of them heavier than anything on the official album. For lack of a better term, let's say they don't fit the final Transcendence theme, but they are far from being throwaways. Lead track "Gump" and "Lexus", for example, sound like prog-rock Strapping Young Lad, while "Into The Sun" could have been yanked from the Ziltoid The Omniscient or Accelerated Evolution records. "Time Overload" sounds like a Ministry tune dragged kicking and screaming out of 1984, and DTP saw fit to update the Physicist album cut

"Victim". The instrumental madness of "Monkey Mind" and the Chuck Berry-meets-"Bad Devil" flavoured "Canucklehead" is icing on a wonderfully fattening cake.