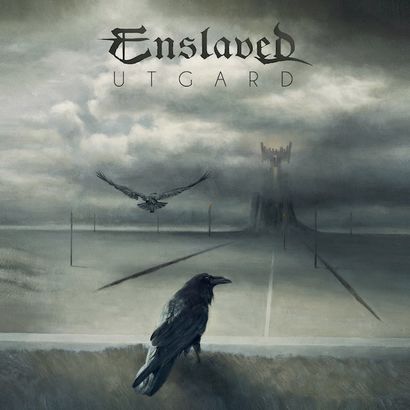 So where do you begin? Certainly not of this Earth. It’s like you climbed the tallest mountain on Mars (which is Olympus Mons but the way - twice as tall as Mount Everest!) and your spaced-out head is numb from the long-winded journey. For those who’ve followed the downright inspiring and fascinating career of these Norwegians, we have come to anticipate that their creations will forever evolve. And to throw a blanket category over them, simply doesn’t do the band (or fans) any justice. It actually gives their name new meaning as they aren’t enslaved to any particular genre and Utgard continues on this trajectory. Case in point, the spoken word intro (“Utgardr”) which crashes elegantly into an Alan Parsons Project meets the Kraftwerk-esque meanderings of “Urjotun”, starting off with a hypnotizing beat while instruments get piled on methodically to the techno-like beat. Give it time, this track will sink in. And a pretty ballsy move to film a video around it! (See below).

“Jettegryta” is easily the first stand-out track, Kjellson howling around pounding rhythms leading to a clean and thrashy beat, while “Sequence” finds a shining groove that will entice socially-distanced mosh-pits to dance a bit different. “Homebound” may be the band’s finest hour. Ever. The first official single kicks off with the ultimate infectious happy riff before blast-beats are laid down with a fury. The entire track ebbs and flows with arrangements fuelled by angst and a deeply-rooted sense of harmony. Once again Sandøy’s soaring vocals carry the song to heights unknown and when the lyric “as we fall, we stand still” starts to sink in, you are swimming in this majestic sea of music that’s arousing all of your emotions.

The grand finale “Distant Seasons” starts off like a gentle and warm embrace. A song filled with hope, which will resonate deeply given the current moment where hope in humanity itself is clearly lacking. But this is a moment to embrace, as elegant notes from yesteryear a-la Pink Floyd, Yes or Supertramp spring to mind. And yes, Utgard is a progressive metal fan’s dream come true. And I’ve always wondered, are people like Gilmour/Waters, Anderson/Howe or Hodgson/Davies even paying attention to their succulent spawn?

Enslaved do it carefully and with class. Moving forward while looking back. And the fact that the black arts is still attached to their name to a certain degree, makes this heavy “meddle” feast even more fanciful.