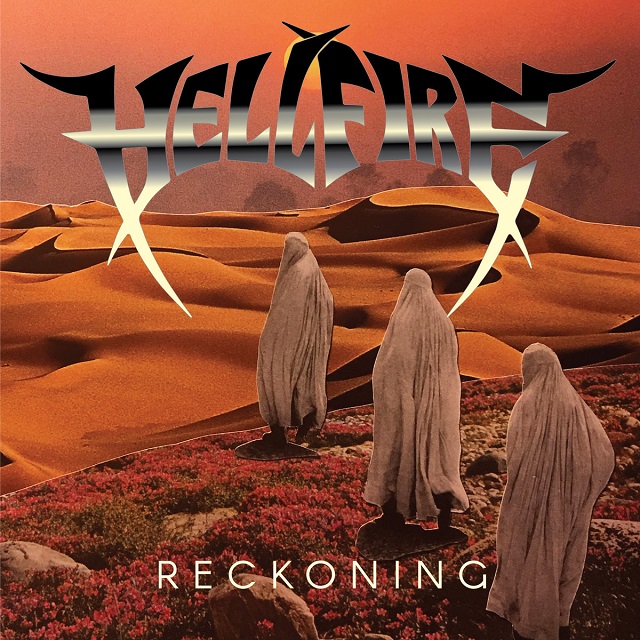 Been delayed a couple of times, but good things come to those who wait... the fourth album by Oakland's best new hope, Hell Fire. While the hyperbolic press release throws around a lot of (dangerous) comparisons to the greatest names in metal over the last 50 years, Hell Fire is not really a thrash band (in the same sense that David Wayne era Metal Church had some elements, but transcended the tag), although there are moments. See straight ahead, shouted "Addicted To Violence". The foursome has made inroads, in the underground, via touring the Western third of the USA, pretty extensively, pre-pandemic.

Don't be misled with the acoustic guitar, Western movie feel that opens the record. The title track soon kicks into a hammering riff, albeit with an overriding sense of melody that has only been hinted at, on prior releases. Jake Nunn's voice has had the shrill, sometimes off-kilter burrs sanded down, without losing his intensity. No easy feat. Hasten to say (as some will take it the wrong way, aka "sellout"/ "commercialism": No!) but the eleven tracks possess a polish, professionalism that the initial trio lacked. That's coming from someone who had
Mania as the #2 album of 2019! Case in point "It Ends Tonight": don't think they could have come up with such a clean vocal, infectiously bouncing number, yet retain the guitar crunch, before now.

On paper, a song entitled "Medieval Cowboys" reads as hokey, but as the lyrics say, "Fuck the world, we're medieval cowboys, we can do what we want!" A double bass driven speedster dedicated to a mantra of playing hard and touring/partying nearly as much. Want some more tasty rapid fire six-string delivery? Check out "Thrill Of The Chase". Simple, repetitive chorus should go down well, live.

Favorite tune has to be "Tortuga Nights", for its 180 degree turn: beginning life as a rather catchy, easy-on-the-ears ditty, before opting for some blazing guitar histrionics. Ultimately ending as a lone acoustic guitar coda. Good stuff. "Eye For An Eye" keeps the raw edge, while "Many Worlds" follow-up (after beginning with a flourish worthy of a Rust In Peace outtake) falls into that (newly discovered) more melodic territory. Speaking of Megadeth, (for one song) the speedy, interwoven intricate guitar patterns of "Nowhere Fast" recall faster numbers by Mustaine's bunch. Nunn's accompanied by that seemingly never-to-far-away acoustic guitar, to begin "A Dying Moon": a 2:48 double-tracked vocal ballad/experiment. A mid-paced fist pumper, "The Executioner" closes the album with thumping bass and shouted gang vocals, come the titular chorus.