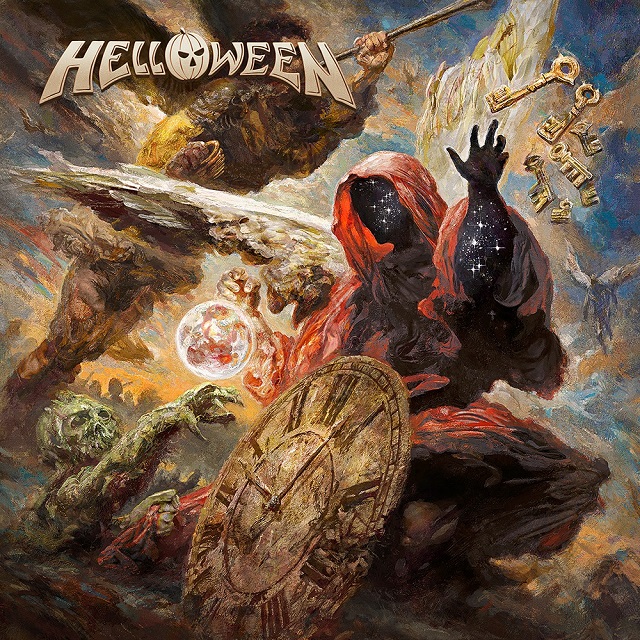 "What have I done that you can't forgive me for?" So Michael Weikath asked his former lead vocalist Michael Kiske back in 2013. Though it took until 2017 for Kiske to take to the stage with Helloween, following on from his departure in 1993, the seed was sown from the chance meeting and this new phase of the band was inspired.

And what a job the collective members have taken on trying to fit together seven members with three guitarists and three vocalists. It shouldn't work but you know what this sounds like? It sounds like Helloween; from all decades. It's easy to forget that back in the day purists believed Kai Hansen was the quintessential Helloween singer and many preferred him to Kiske. Likewise several long-time fans were left disappointed initially at the difference between Andi Deris and Kiske as they were so different. This is now the 11th album with the band that Deris has appeared on and he's well and truly earned his (pumpkin) stripes.

After so long with the band having replaced a singer who was something of an opponent it is of enormous credit to Deris that he was happy to meet with Kiske, and in fact it was he who suggested the band should not just reunite with Kai Hansen but his predecessor too. Incredibly after some of the negativity and past hurts associated between old and new Helloween the two singers found they liked each other's company. And that is the basis of this wonderful combination of Helloween from all eras. For without that personal chemistry it would never have worked. Huge credit must also go to Dennis Ward and Charlie Baeurfeind for their work in balancing the combination, they are truly keepers of the seven members.

To put this collaboration into perspective imagine for a moment, Paul Di'Anno and Bruce Dickinson singing together for Iron Maiden. Now imagine them with Blaze Bayley too. Horrible idea, right? Yet Kiske, Deris and Hansen really gel throughout the album and it never sounds strange that they're all singing their respective parts - allowing the appropriate singer to take centre stage depending on the song. And the song is king. Hansen brings ‘Skyfall’ to the table, hoping to sing the whole number only to be persuaded it would sound too much like Gamma Ray so he performs his solo parts and shows the professional he is.

Intriguingly there is no Kiske writing credit, although if there is to be a follow-up album it is likely. Hansen also only features on one writing credit (unless you count the pre-existing ‘Pumpkins United' on the Japanese bonus disc, which should be purchased). Given ‘Skyfall' is a 12-minute classic, more Kai would have been welcome. Likewise the missing Andi Deris ballad that was shelved due to a production glitch that made the band hold the song back.

Despite the amazing production work, there is one complaint and that is the obvious use of auto-tune on the vocals. At times it's just too apparent and spoils the natural vocals as we know and love them. Perhaps that was an inevitable requirement of merging the voices. When the vocals are cleaner the result is stronger. Witness the verse to 'Cyanide' before the refrain.

It's hard to choose standout songs here as they are all classic Helloween - sometimes they recall the eighties, sometimes the early 90s and others the 2000s. There is a great balance of writers and performers with six pumpkins contributing material, which
is the strongest collection from the band for some time.

No doubt this will go down as a classic and there is excitement about what might come next. The past in different ways? Sure. But there's a future world here too and you know what that will be like? Glorious.