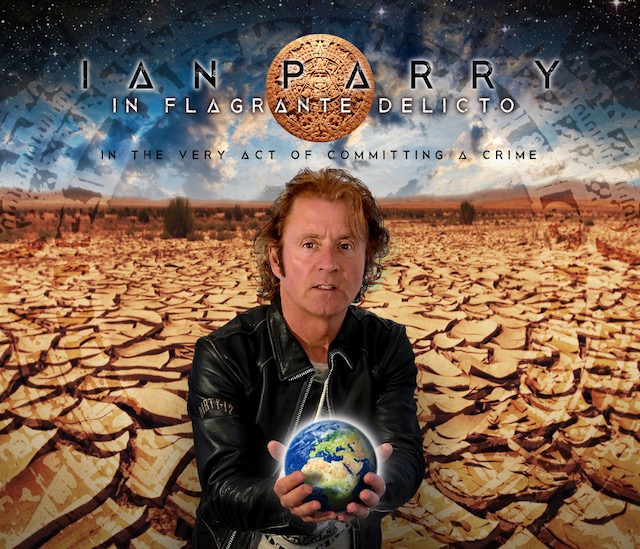 Vocalist Ian Parry has been kicking around for well over 30 years, having made the most noise with Dutch bashers Elegy in the '90s and his five-album Consortium Project, which ran its course between 1999 - 2011. In Flagrante Delicto dials things back from the metal of these previous outings to a more classic-rock foundation, and it may well be one of the strongest records of his extensive career. It most certainly crushes Parry's previous four solo albums.

Lead-off track and laid back track "Spaceman" initially strikes one as odd for an album opener, but it's easy to see it as an intro for what's to come as In Flagrante Delicto plays out. Things get progressively heavier, hinting at the glory days of acts like Yes, Deep Purple, classic Styx, and Marsden-era Whitesnake. By no means is the material dated, however, as Parry is unafraid to mess with Rammstein-esque samples and crunch grooves (see "In Flagrante Delicto" and "Impulse"), deftly using them for nuance rather than as a move to remain relevant in 2020. And if you want to use the old adage "everything old is new again" it's fair to say Parry does a solid job of it. "Travellers" shows his love for tasteful prog - so well displayed during his Elegy days - while "Fool's Paradise" and "Wish" are simple straight-ahead no-frills rockers that will likely annoy the more closed-minded prog-loving members of Parry's audience. The album winds down with the feelgood vibe of commercial Rush in "Fly" - a favourite of the moment - followed by the polar opposite brood of "The Day We Stop Dreaming". It closes with a feather in Parry's cap, the stellar "So Far, So Good", which recalls the early days of Dream Theater (Images And Words / When Dream And Day Unite) before all their widdly prog wankery was levelled-up to 11. A brilliant way to end the record and force a repeat listen.

It's worth noting that, as with his Consortium Project outings, Parry is backed by a host of well-known players which no doubt shaped the songs into their final forms. Former Elegy guitarist Patrick Rondat, Vanden Plas guitarist Stephan Lill, Queensrÿche / ex-Kamelot drummer Casey Grillo, and Blind Guardian bassist Barend Courbois are only some of the musicians involved - all of them shredders in their own right - making In Flagrante Delicto a fine of showcase of what these folks are capable outside of their respective comfort zones.

A lot of talent was brought to the table here, and it's a well prepared feast for the ears.