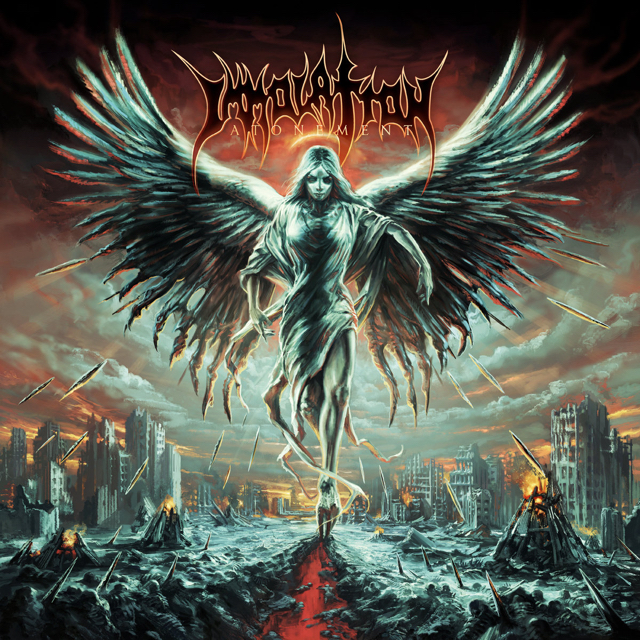 Death metal fans are an unforgiving lot. One only needs to look at the last Morbid Angel album, Illud Divinum Insanus, to see/hear just how protective and guarded that many of us are when it comes to this music we love so very much. In an effort to please both fans and artistic freedom alike, where does a band draw the line at experimentation? With such strict rules and limitations applied to it, by us fans, death metal no doubt has a fuck of a time when attempting to free itself from the shackles of perceived stagnation. Now, I use the descriptor of 'perceived' to illustrate an important point: what I perceive may be a completely different thing than is perceived by the guy headbanging in front of me at a Morbid Angel concert. I mean, it's highly likely that both he and I ended up at the show based on a shared love of death metal. But how deep does that love go? Where do we each draw the line as it relates to our perception of what this music should or should not be? If that guy in front of me is banging his fucking head off to, say, "Destructos vs. The Earth/Attack", it's likely that his perception of death metal is quite different than mine. Is it still worthy of the tag death metal? Delineated even further, is it still even metal? I'm not so sure that either he or I could answer that with any more certainty than we could answer why it is that either of us even exist. It's a question that will, most certainly, raise even more questions. So, why bother? Maybe, just maybe, it is what it is.

That being said, there are tips, some tools of the trade, that, when applied to death metal proper, will quell elitist screams of "sellout!” The first - and perhaps most important - tool a musician could add to his arsenal is a little thing called sincerity. We death metallers are quite apt when it comes to identifying bullshit - we can smell stink from a mile away. Is Ilud a sincere representation of the Morbid Angel experience? Again, a question that isn't easily answered by merely listening to the album. One would have to delve deep into the twisted and fucked up recesses of Trey's mind to get a true understanding of what he was thinking at the time.

The second, and arguably just as important tool is unpretentiousness. You see, us old-schoolers - the ones who grew up with these trailblazing death metal bands - feel at one with each and every band and personality within said bands. These are our guys - our bros - our death metal brethren. When one of our brothers falls into the clutches of musical arrogance, we are right there calling them out. If Trey had - while in writing mode for Ilud - stepped outside of his ego for just a moment, he might have thought twice about the direction of Ilud. Much to the chagrin of our fallen brothers - bros just like Trey - we actually do this out of love; an ongoing effort to save our beloved brutality from those with nefarious intentions. Remember the mid-90's love affair death metal had with the big labels? Yeah, that. More often than not, though, we are saving death metal from itself.

Anyway, as you can see, it's not all so cut and dry as it may seem. In reality, these guys - and their music - run super fucking deep. With so much music being produced, there are bound to be a few missteps along the way. In the case of Morbid Angel's Illud Divinum Insanus there is, thankfully, an atonement - a literal atonement. It comes to us in the form of Yonkers, NY legends Immolation and their brand new album entitled, you guessed it, Atonement.

We might not have realized it, but this is the album we've all been waiting for. This is the one album that takes every goddamn delicious nuance of this beautifully discordant music and delivers it with an unassuming exhilaration not heard in years. Seriously. This isn't to say that recent albums from bands such as Deicide, Cannibal Corpse, and Incantation haven't been good in their play-it-safe/if-it-ain't-broke way. I mean, there is something to be said for consistency, right?

Previous Immolation albums also played by these very same rules, never straying too far out of their comfort zone. What they've done with Atonement, though, is what Morbid Angel attempted, yet failed, to do with Illud. They have taken a decades old machine in slight disrepair and - instead of tearing the entire thing apart piece by complicated piece - they instead chose to oil a few rusty cogs, tighten several loose nuts and bolts, and re-calibrate essential systems. Easy peasy, right? Wrong. Like the exacting work of a Horologist (aka Watchmaker), indiscriminate tinkering of crucial pieces of a complicated and abstruse system - where one piece relies on countless others - can be disastrous. One has to be skilled-yet-humble when attempting to dissect viscera, be it machinery or music.

Bob Vigna is that Watchmaker. As the lone guitarist of this four-piece miscreation, Bob has taken great care to ensure that the very essence of Immolation remains intact while he poked and prodded his way around this self-made machine. From the first seconds of opener "The Distorting Light", it's clear the guys aren't fucking around. The off-kilter, eerie riffing of the intro exudes a simplistic-yet-sincere vibe that gets straight to the fucking point. Just as the title implies, the music alters its pacing from slow to fast depending on what light it's cast in - the more crepuscular the section, the more measured and ominous the riff. This is straight-up, no frills Immolation.

The third track, "Fostering The Divide", is the colossal, ruinous love-child born of a wanton, steamy orgy-of-riffs spewed forth from the best eras of both Immolation and Morbid Angel. Man, that opening riff - like a consistently thrusting knife to the throat, its jagged, angular rhythm lulls the listener into a soporific, death-like state. With no time to catch your breath, the song then hits with perhaps the album's heaviest riff at the minute-ten mark. Simply put, there hasn't been a better riff in death metal since Morbid Angel's crushing "Hatework" some twenty-two years ago. That's nearly a quarter century of death metal riffs that have come and gone - thousands upon thousands of riffs in one ear, and out the other. This one riff destroys every single one of them. Think about that for a minute. If this weren't enough, about midway through, the song takes on and even more sinister vibe, jumping right into black metal-like territory, yet delivered with a precision and excellence that can only be achieved by a band at the very top of their game. If this song doesn't make you a lifelong believer in the absolute crushing power of death metal, nothing will.

By this point in the album, it's become clear that the guys can do no wrong. The remaining eight tracks twist and vex their way through old and new territories alike. The entirety of Atonement is delivered with a huge, soothing breath of fresh air - almost like the guys awoke from a centuries-old slumber in an ancient tomb, strapped on their respective instruments, and proceeded to record the album from within said tomb. The production matches the reinvigorated atmosphere perfectly, with each instrument being given ample room to breathe. This thing fucking booms. It lives.

In the end, it goes without saying that sincerity and modesty are crucial components for bands with such storied careers. As it relates to Atonement, Immolation has successfully avoided the formulas fatal to the flesh. The album is chock full of new and refreshing ideas, yet not at the expense of what he have all grown to love about our beloved Immolation. Fans will most certainly recognize this, and flock to the album in droves. Honestly, death metal does not get any better than this. Atonement exudes sheer perfection and class. It is destined to stand at the top of the death metal game for many, many, many years to come.