KONQUEST - The Night Goes On 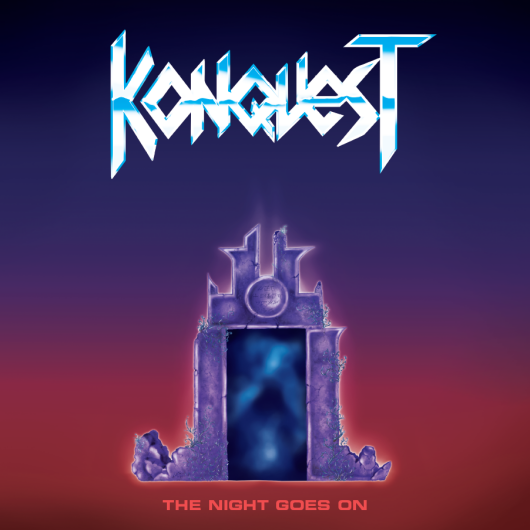 Now a full-blown band, Konquest actually began as a one-man, solo outing for Alex Rossi, who plays all the instruments, as well as recorded/produced the project. Without getting too metal-nerdy, this sounds like a lost Heavy Load platter. Not that they ape the Load canon, ala Blazon Stone, when it comes to Running Wild. For those versed in Heavy Load lore, it's closer to "Run With The Devil" than "Singing Sword," an infectious mix of hummpa and proto-power metal. The swirling, vintage guitar tones, prominent use of start-stop/shuffle snare drumming, a nasal vocalist in a cavernous, echoing room and the bouncy ABBA influenced constructions all scream the adored ‘80s Swedes, but Rossi is from Italy. Not bad for a project that only got off the ground in early 2020.

After the initial "Theme Of The Konqueror" instrumental, there are just six proper tunes, as 3:34 "Fall Of The Konqueror" (an intermezzo, appearing midway through the running order) is another voiceless contribution. The title track is up first and proudly announces the aforementioned influences, especially during the extended guitar break. Follow-up, "Too Late" increases the pace, to a mild gallop, and offers a more forceful vocal performance. Riding a staccato riff and similar tempo, mild headbanger "Keep Me Alive" adds to the plot. Despite a title that might intimate otherwise, "Holding Back The Tears" is no ballad, returning to a mid-tempo stomp.

The real comparisons to Heavy Load come in the final pair. Beginning with "Heavy Heart" (purposeful pun?), the resemblance is uncanny, but the piece de' resistance is the fist-pumping finale, "The Vision" and at 7:19, is the disc's longest duration. Not only does it frequently change speeds (though predominately remains the fastest cut, overall), but the length allows for embellishment. Wouldn't mean a thing if it weren't a catchy bit of metal.

Great debut for a new label (brought to you by the same people behind the traditional-minded output on Skol Records). Vinyl will be issued, at a later date, via No Remorse.