LAUGH AT THE FAKES - Dethrone The Crown 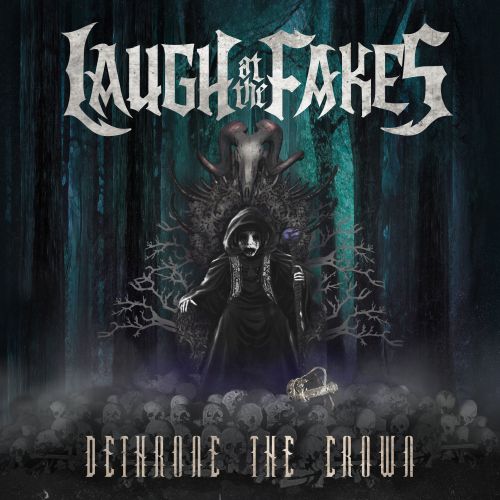 Toronto’s Laugh At The Fakes is onto something great here. Don’t let the predictable four-word name that some homogeneous metalcore band would call themselves, because Laugh At The Fakes kicks major ass on its debut full-length album, Dethrone The Crown. Forming in 2010, the youngsters skillfully blend progressive metal, Bay Area thrash, NWOBHM and melodic hard rock on its nine catchy-as-hell tracks, which most of them possess a high head-banging factor.

Laugh At The Fakes’ sound invokes diverse influences of bands such as Avenged Sevenfold, Trivium, Iron Maiden, Metallica and Led Zeppelin, to name a few. Singer/guitarist Everett Mason’s inviting range captivates and impresses with every harmonious note. He explores his metal side as well as his classic rock side, sounding like a younger version of Scorpions’ Klaus Meine meets Dream Theater’s James LaBrie. The rest of the band, consisting of bassist Galen Weir and drummer James Agostino, likes to explore its thrashy side, most notably on “Death Awaits,” in which they pull off a very convincing Death Angel moment.

At 50 minutes in duration, Dethrone The Crown never fails to please. However, a little past the halfway mark the album shifts gears a little bit by displaying twangy, blues-based rock elements, starting with “Harmonica Playing Man” and continuing with “And I,” only to end on a high note with the explosive title track. Most of the tracks are on the longish side, with the shortest track, “Cut To The Chase,” clocking in at 3:36. But every single track is so well-crafted that they never become boring. There’s absolutely no filler here folks. On Dethrone The Crown, Laugh At The Fakes covers the metal gamut in a fresh and exuberant way and they deserve a shitload of attention.