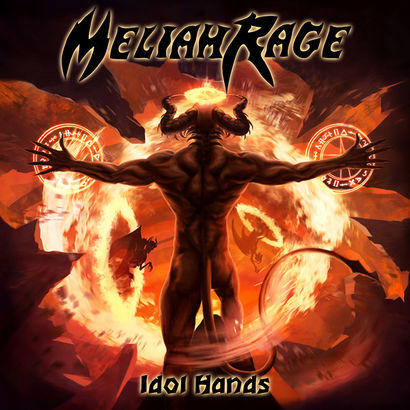 No doubt you’ve heard the famous Hunter S. Thompson quote: “The music business is a cruel and shallow money trench, a long plastic hallway where thieves and pimps run free, and good men die like dogs. There's also a negative side.”

And there’s no justice. Take Meliah Rage for example. The Bostonians have been fighting from the trenches since their beginnings in the ‘80s with varying degrees of success, but certainly not at the level they should have risen to given their incredible talent.

But with Idol Hands, they’ve taken matters to deeply touching, greater hate-filled heights. Think about it. We almost “lost” two of the most under-rated musicians on the planet. Literally. Guitarist Anthony Nichols suffered a near career-ending wrist break in December of 2013 and had three major reconstructive surgeries to fix the problem. And I’m certain he was told by doctors that maybe you’ll be able to hold a pen, or a beer. But a guitar? “Dream on” buddy. But take one listen to the glorious riffs he shoves down our throat, it places the man at super-human levels, cause I’ve seen the startling wrist-break photos.

And to cut to the chase, singer Paul Souza was in such a state of depression that, to quote the man, “you nearly lost me.” So lyrically, Idol Hands is an emotional roller coaster, the knife gets twisted even deeper if you have family members in the same situation, like yours truly does, as I’ve lost two family members to suicide.

So Idol Hands is also therapy. Lyrical subject matter that used to be brushed under the rug. Metal health will drive you mad indeed. This two-pronged attack hits you physically and emotionally, and together have created what could easily be album of the year for 2018.

It kicks off with the “this is war” attitude of “The Kill - All Rule” and first video clip “Dark As Your Thoughts”, while “Crushed Beneath My Heel” and the title track set the ultimate tone with steam-roller leads, powerful harmonies and that untamed gallop from a bottom end that’s hard to match thanks to bassist Darren Lourie and drummer Stuart Dowie. Bruised beyond your “wildest dreams”. The latter is the perfect play on words; “These idol hands, Will never shake and never pray.” The song prances un-gently until the pit-party appears with that undying “I’m gonna win this battle motherfucker” chorus kicks in.

As a Canadian, I couldn’t give a give a flying fuck about Donald Trump, but our brothers from the south obviously need to voice their opinion about the voted-in power that’s “absolute”ly tarnished the red, white and blue. And don’t get me wrong, I get the relationship that Canada needs to keep with our neighbours.

“Dark As Your Thoughts” and “Sentenced To Life” is the plight of Souza, stuck in a deep, dark hole of suicidal tendencies. But Nichols and exceptionally talented shredder Jim Koury, echo the same sentiments with their (not so) idle hands. So in tandem, Meliah Rage have created one of the peaks in their career.

“Infernal Bleeding” is a page taken from Dirt, Souza building on Layne Staley’s pain and torture that killed him. The chorus will cause bitter tears, showcasing one of the greatest frontmen in heaviness ever. Yeah, I said it. Just listen to his passion and versatile range, while the knife stabs deeper into your metal heart. And you feel it being twisted.

So before this 41-minute album closes, “Where Darkness Lies” just builds on the present, past and future with no regret. You get it. Supreme power metal majesty. All pistons firing. And man, I totally love the marching grand finale.

Like Reign In Blood, when you’ve made your point, don’t “Hardwire” the mission. End it. Now.

What makes Idol Hands so riveting is that it’s a concept album of sorts. A stark reality many families are dealing with and Meliah Rage confronts it head-on, with supreme results.