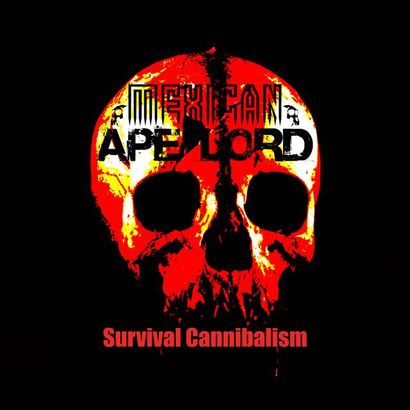 Now this is something you can chew on, gnaw it right down to the bone! Meliah Rage guitarist Anthony Nichols stretching out his talents again uniting with The Bags vocalist/bassist Jon Hardy, drummer Steve Fry (Crotalus, Graveheart) and lead guitarist Dan Dykes (Triphammer) on the sophomore Mexican Ape-Lord album. Truly unique band name aside, Nichols hands-down is one of the most under-rated guitarists on the planet with those Hetfield-meets-Iommi rhythmic vibes, so Survival Cannibalism is based around his gut-wrenching and epic riffs. Meanwhile Hardy, who’s hardcore punk ethic is no secret, powers his way through this intense and horrific tale. Strangely enough there’s been no movie about this and only a few books with varying recollections of what actually happened on that fateful day December 11th, 1710 when the British merchant ship, Nottingham Galley crashed into Boon Island, just off the coast of Maine. And strangely enough, mere miles from where Nichols and Hardy actually grew up! But as you’ll see in my upcoming interview with the singer, “I was never taught this story in my history classes,” Hardy laughed. For 24 days, a crew of 14 dwindled down to ten, trying to survive winter conditions with no food and no fire for twenty-four days. Captained by the notorious John Deane, the group resort to cannibalism to help them survive, hence every song on the album relating to parts of this horrific tale. “Black Cloud” sets the tone with a punchy vibe setting up the narrative, and immediately you get the sense that Hardy is putting himself in the sea-faring boots of the doomed. Desperate, destitute and distraught.

“Situation” is the first lyric video we saw recently showing the first hand-drawn images of the tragedy, with the most infectious chorus line “Here we are, here we are, on a jagged rock!” “So Much Wasted Rope”, “The Devil Does Divide Us” and “Dereliction” are Mexican Ape-Lord’s “South Of Heaven” moments, down-tuned, dirty and full of power, especially the latter which I can’t get out of my head. Those glorious ear-worms that just crawl around your brain like maggots. And you can envision maggots emerging from the dead as the starving crew saw only one chance left at survival - eating their own. That’s one way to make your piece of the privateer pie a bit bigger. “Stinkin’ Drunk On Blood” and the closing track “Mezzick And Drakelord” add a little lyrical humour to the mix. In one word, Survival Cannibalism is addictive. And wait ’til you hear the raucous gangland backing vocals on nearly ever song. If there was ever a mutiny to be found on an album, this it.