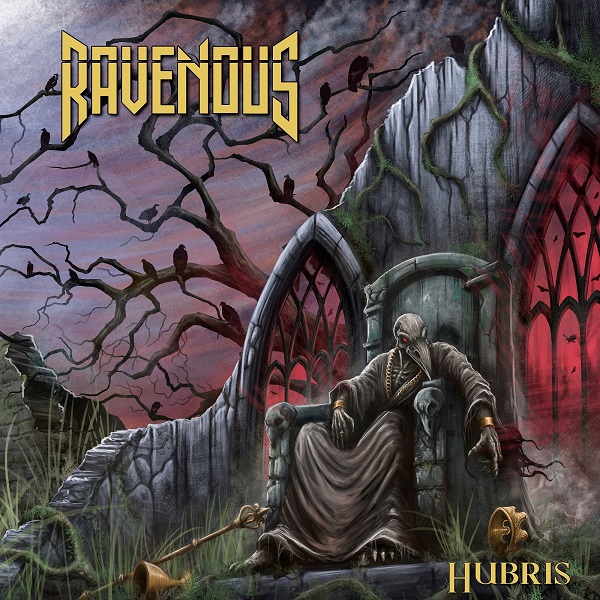 Young power metal squadron Ravenous have returned with an energetic sophomore album, Hubris. An blissful combination of Euro power metal with speed metal; those looking for technicality and a surge of up-tempo anthems should give this one a look.

With the title Hubris, the band explains the album “tells ten stories from various sources all surrounding Hubris, the notion of arrogance and the hunger for power.” A unique lyrical theme, Ravenous also has the symphonic instrumentation interspersed throughout the music, but is not the main ingredient. They’ll spice up the speedy numbers with bells, accordions and an assortment of other symphonic, folk instruments and considering the album title – does take some Hubris to pull off.  The searing guitars and bulging drumming with R. A. Voltaire’s commanding vocal presence are the main course, especially on the full steam ahead thrasher, “The Alder Queen” while “Astral Elixir” exudes guitar theatrics and stands out as one of the best tracks. “Son Of Storms” begins with a main melody reminiscent of the “Song Of Storms” that The Legend Of Zelda fans would be familiar with and “Onwards & Upwards” is the lone ballad, but not a skippable one – heeding an epic and heroic toil that will remind of Sabaton.

10-minute closer “…Of Beasts And Faust” begins softly which then explodes into a gallop that melds the melodic speed of Iron Savior and the anthemic, fist-pumping vocals of Powerwolf. Ravenous is one to watch in the power metal scene; be sure to give this one a look.