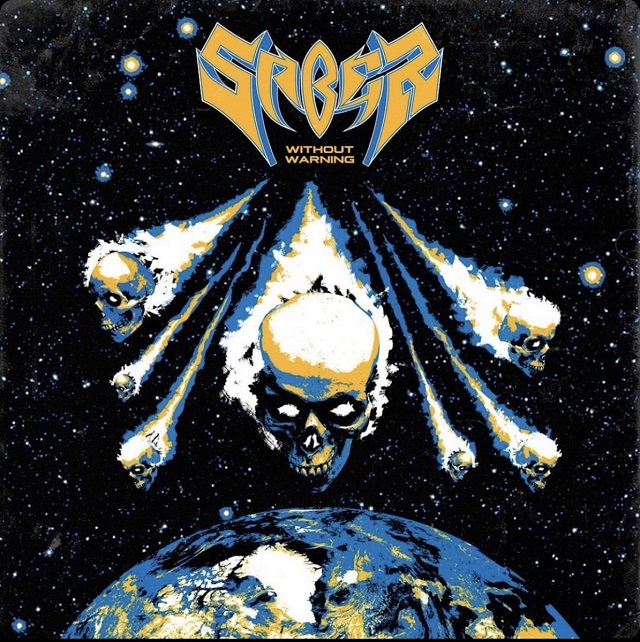 Signed to Haunt mastermind's label (Trevor added drums to these eight tunes), here's a new LA based Latino clan offering up traditional metal. Honestly, when looking at the video for the title track, originally thought it was a lo-fi South American outfit. Pleasantly surprised to discover they were from the States. Online, someone commented on said video: "Is it 1984 and did I just wake up, watching Night Flight?” (old USA Network's late-weekend nights' entertainment program). If you get that reference, you'll appreciate singer Joel Dominguez's dyed, two-tone hair and bright red vinyl (pleather?) vest and falsetto vocals. If not, maybe just better to stay away, as their target market is for a pretty specific (read: narrow) demographic, and overseas, at that.

Didn't stop me though. Musically, it's a mix of high octane, NWOTHM, with the odd foray into proto-speed territory, but never losing those early-Vince Neil highs, punctuated by even loftier falsetto. Both of the previously released singles ("Strike Of The Witch" and blazing "Speed Racer") are included here. Don't know if that was always the plan or whether Covid prevented further developments. The roll of thunder and crack of lightning (seemingly lifted from a Scooby Doo, or other ‘70s Saturday morning cartoon) greet "Storm Of Steel" lead-off. Just one of the kitschy (snobs would say "Cheesy") moments that make Saber so endearing. This is not a bunch to approach without tongue lovingly, but firmly, set in cheek. Look up the definition for “over-the-top” and there's probably a photo of Saber accompanying the dictionary annotation!

There's a bit of Sunset Strip, sing-along sensibility to the titular/video number, apart from the falsetto accentuation (don't try that at home, folks!). Switching gears, the gritty chug of "Midnight Rider" gives Dominguez the opportunity to show off his sustain, as well as stratospheric pipes. Within "Strike Of The Witch", the singer shouts, "My cries will destroy you," which is definitely true, as some metalheads, will undoubtedly be unable to handle it. "Outlaw", which seems a little under-cooked, is still tasty, in a Too Fast For Love-era Motley outtake/junk food vein. Jake E. Lee's "Bark At The Moon" guitar work reappears in "Leather Laced Lady" (even that title is so ‘80s!) although no one could confuse the two vocalists.

The closing pair end on the strongest note (pun intended). Straight forward "We'll Meet Again" bounces on a simple, repetitive lyric that foreign audience (swaying side-to-side, in time to the music) will latch onto and the aforementioned "Speed Racer" (talk about those ‘70s cartoons) lives up to its name, blazing away, to the finish line.

See you in Europe, guys!