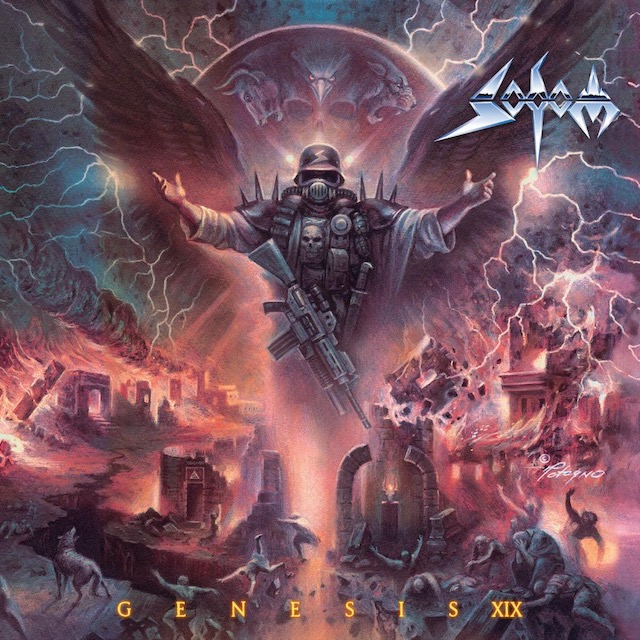 Sodom are back, well as a four piece, the band never went away or stopped making new music, always led by singer/bassist Tom Angelripper, and rejoined by alumni Frank Blackfire who appeared on the classic Agent Orange. Like Destruction, it’s an upgrade to have the two guitar team for creativity in the studio, and especially live. After a minute long intro ("Blind Superstition") segues into the blasting "Sodom & Gomorrah" and you instantly brought back to the album Persecution Mania.

Now while Blackfire played on that album as well, Genesis XIX does not have the polish or production of Orange, its rough, rusty sounding, the songs still have that Motörhead brash to them, and Tom's bass tone. Cool opening riff on "Euthanasia", title track fades in and starts dark and dramatic, ominous as a more focused idea that Sodom could have been trying to work out on Obsessed By Cruelty. At seven minutes with riff, drum, tempo changes, it’s a great piece of thrash movement. And Tom's voice still projects that snarl and gruff he is known for. "Nicht mehr mein Land" could have been on Tapping The Vein, fast and brutal like post ‘80s-Slayer, and "Glock n Roll" feels like a song from 2006’s self-titled album. Strong build in "Dehumanized" that settles in its straight forward delivery with splashes of black metal riffery. Who are "Waldo & Pigpen"? The names are connected to the Vietnam war and pilots. Sodom at times have a tune that is punk-ish in spirit; it’s "Indoctrination" for this album.

With 34 years of music, the addition of a second guitarist, and a new drummer, Sodom still has an arsenal of ammo for their gas mask mascot, Knarrenheinz. It's nothing out of the ordinary, just Sodom doing what they do.