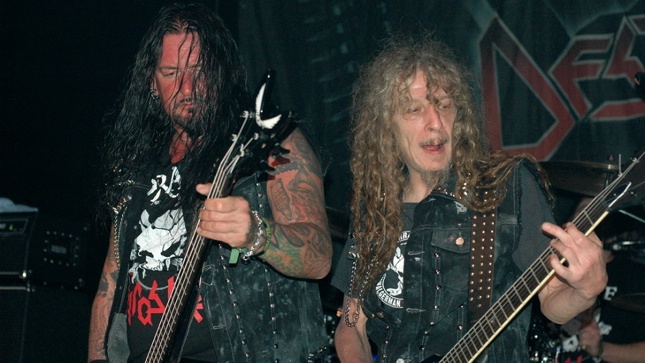 Awoke Saturday morning to find we'd stopped, docked at Ocho Rios. We scrambled onshore, set to find some beach time and a meal: something of a Jerk chicken variety, well aware of the 3:30 curfew and 4PM departure. Shipboard, the music will reconvene once under sail. Immediately upon leaving the ship, you're inundated by sales offers, taxi rides and the like. Anything for a buck in a developing world. We push past the initial slew of sellers/con men and quickly notice the "tourist area" fading in the distance as we pass dilapidated, non-descript huts/stores. Rounding one last curve, before heading back, a cabbie informs us we are at Mahogany Beach, the tourist spot to which most of the taxis were threatening to take us. Although a guardhouse signed proclaimed "No visitors", we were allowed to enter, free of charge, even though Metal Tim's pentagram pendant remained around his neck.

White sand beach, crystal clear aqua colored water, an outdoor bar/cantina/restaurant: what's not to like? Only a few other ship's passengers made the trip (all but us, by taxi), including Mike and Schmier, from Destruction (who still had to play today, after yesterday's cancellation), Melechesh guitarist/singer Ashmedi and Heathen frontman David White, plus a few industry types. A dip in the water cools, a few bottles of ice cold Red Stripe further relaxes, feet in the sand and then a platter of Jerk chicken, with a side of conk fritters, right before heading home: an afternoon well spent! A long procession to get back on the ship and we were underway almost immediately. With a half-dozen make-up sessions to squeeze in, daylight action on deck is finally ready, kicked off by Pretty Maids.

Few came onboard already as tan as singer Ronnie Atkins, something of a metallic George Hamilton, the Hollywood actor seemingly always a dark shade of orange. Despite wind and the ship's homeward bound velocity, guitarist Ken Hammer managed to keep the ubiquitous straw cowboy hat atop his head. Today, the Danes played their sophomore effort, Future World, in its entirety (albeit non-consecutive), Atkins wearing a t-shirt sporting the colorful cover art. OK, "Love Games" and "Eye Of The Storm" may not have aged well (how many of us have, since the 80s?), yet the title track, "Rodeo" and "Yellow Rain" not only remain staples of the live show, but three decades later are still kick ass live anthems. Atkins admitted this was the first public airing of "Long Way To Go". "Loud n Proud", followed by Needles In The Dark" finished the requisite album material, before again ending with the dynamic duo, "Back To Back" and "Red, Hot And Heavy". As Scream magazine (Norway) photographer extraordinaire Hakon Grav discussed, after the fact, "There's some filler on all these albums bands are playing in their entirety these days." True, but glad I was there to witness it.

Amorphis had missed out on performing outdoors and here they were on essentially a small club stage (Studio B). This was a greatest hits set, concentrating on the Tomi Joutsen era of the band, with four cuts of the most recent Circle album. The bellowing frontman, with knee-length braids, has given the Finns a second life, capable of commercial success, as well as replicating their bygone, gruff throated death metal days. The following night they'd try out the Tales From The Thousand Lakes set, which they'll play around Europe this upcoming festival season. The pink tinged "Silver Bride" preceded "The Smoke", which given our port of call just a few hours earlier, took on an unintentional spin, for some in the crowd. Are you familiar with your older Amorphis material, asked Joutsen, leading into "Against Widows", the lone paean to old school, despite the raucous reception (wait for tomorrow!). Still got mainstay guitarist Era Holopainen to headbang. The only thing better was a closing rendition of "House Of Sleep". Amazing band that deserves more recognition for longevity and influence.

Chris Boltendahl was in good spirits, all smiles and toying with the crowd throughout the Grave Digger set. "Hell Funeral" threatened to tear a Titanic-sized hole in the hull, guitarist Axel Ritt showcasing all the splayed leg guitar god poses while churning out blistering riffs. "Dark Of The Sun" is a mid-tempo sing-along and leading into the next song, Boltendahl was talking about their second album when he suddenly thrust the microphone in my face and asked, "Mark, what's the name of the band?" The abrupt segue caught me off guard, as I was expecting a proper introduction to "Witch Hunter" (which came next), so I clarified the question, before answering correctly. Between songs, the frontman lead the Platinum crowd through a four line a cappella, Jamaican accented ditty that concluded, "The Grave Digger is on the cruise". Too funny. "Ballad Of A Hangman" is a strong live cut, leading into the pink/purple lit newbie "Season Of The Witch". Always ready to lob a couple of curveballs, the Germans opted for "Lionheart" (Ritt now topless) and "Knights Of The Cross", before the rocking "Excalibur", Boltendahl repeatedly crossing the stage, mugging/sticking out his tongue and playing serious air guitar. Behind him, drummer Stefan Arnold effortlessly flipped his sticks as he pounded out the rhythm. Ritt's black & white striped guitar was played vertically, especially when he moved center stage. A small pit erupted for "Tattoed Rider", but the duo of "Rebellion" and "Heavy Metal Breakdown", which finished the evening, took the crowd to another level. Was there anyone aboard that didn't know the lyrics to "Heavy Metal Breakdown"?

Couldn't pass up the chance to see Wintersun again, this time under the (sleeping) stars! The wind was whipping Jari's thin blond hair as the Finns performed four of the same tracks as the day before (essentially flipping the succession:"Sons Of Winter And Stars", "Darkness And Frost" and "Time" to the end of the set), as well as five others. A RAW SHIT sticker is affixed to the bottom edge of his white guitar as he tore into a shredding "Battle Against Time". Having seen/heard the later portion of the set the night before, sneaked away about mid-way through, to check out a little In Extremo, the German-language outfit that dresses in strange garb and plays oversize, four-foot long Medieval "bagpipes" (for lack of a better description), lutes and harp alongside traditional rock equipment: Mohawk and other funky haircut dudes playing equally odd looking instruments. Pretty sure no one outside Germany really understands, but its damn infectious music!

Not sure what Nergal did on his off day, but the indoor Behemoth show (lacking the opening ritual) was no way as frenzied as its outdoor counterpart, opening with purple lit "Ora Pro Nobis Lucifer". The always brutal "Conquer All" followed. A heavy dose of The Satanist was on display too. "Decade Of Therion" was a nice surprise (if you can call it that), between the likes of "Ben Sahar" (complete with pre-recorded intro) and "Messe Noire". The lethal back-to-back "As Above, So Below" and "Slaves Shall Serve" came on the (ahem) back of "Ov Fire And The Void". The band is currently on tour throughout North America, alongside cruise shipmates Cannibal Corpse, check 'em out.

Mike Sifringer, guitarist for Destruction is certainly more at home onstage (or smoking in the bar, as he'd be the following night) than on a chaise lounge at the beach, occasionally dipping his feet into the water, as witnessed Saturday afternoon. Mouth agape, his hop-step walk about the stage, his mane of hair bopping in time, he's a human Muppet! Hair flailing, they storm through the opening "Thrash Til Death", he and hulking mainman Schmier are a formidable tandem. The stage had a mini-version of the 3-mic set-up normally employed, allowing the bassist to maneuver and sing from different parts of the stage. The yelped intro to "Total Desaster" gives way to Schmier propping his giant bass against his leg, as he plays the four-string vertically. Sifringer seemed to be enraptured, laying down the thrash anthems notes. Afterwards, he asks the crowd, "Did you get a sunburn? We did!" "Nailed To The Cross" and "Mad Butcher" sees the audience add to the chorus, without any coaxing. There's no real light show on the Studio B stage, apart from a persistent strobe barrage. Following "Armegeddonizer", "Eternal Ban" sees the return of a circle pit. Schmier announces they have three songs left and taking requests, asks what the decidedly old school throng would like to hear. The answer comes back, "Deathtrap", "Bestial Invasion" and "Curse The Gods", the final two having already been pre-selected to close the show, as per the printed setlist. Regardless of its sudden inclusion, the trio offers up a blinding "Deathtrap" (in lieu of "Carnivore", a better choice), then the two-song finale that, after all these years, they undoubtedly could play in their sleep. Rumor has it the band will be back in North America, come May. Can't wait!

Speaking of sleep, a lengthy, sun-drenched day of walking, swimming, drinking, thrashing and photographing took its toll...just one day left and rumor has it no one has the opportunity to get any real rest the final night of the trip.

Check out previous 70000 Tons Of Metal reports below: