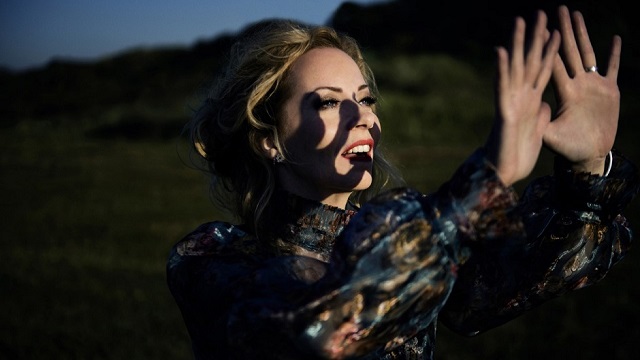 Vocalist Anneke van Giersbergen made a name for herself in the '90s with Dutch metallers The Gathering, and since the leaving the band in 2007 her career has blossomed as a solo artist. It has also grown to include repeated collaborations with Devin Townsend and Arjen Lucassen (Ayreon, The Gentle Storm), session work with some of metal's finest, and the launch of her progressive metal band VUUR in 2017. When the world isn't being plagued by a global pandemic, Anneke is also known for doing live solo acoustic shows regularly - most often in her native Netherlands - but up until now she had never committed to recording an acoustic album. The Darkest Skies Are The Brightest is her first and likely not het last shot at doing so, and for fans of the lady's work it will come as no surprise to discover this isn't your average paint-by-numbers slow burn acoustic record. It is next level organic music powered by Anneke's unmistakable voice and unwavering drive to create something that stands out from the crowd.

So yeah, when it comes to Anneke's mindset going in, this is the most metal acoustic record you've heard.

"There you go, my work is done," Anneke laughs. "Like you said, I do a lot of acoustic shows but I've never ever made an acoustic album. It surprised me because my last effort was a progressive metal album (VUUR's In This Moment We Are Free – Cities from 2017), so I would think that everybody would be totally weirded out by this album. Not only is it a much softer album, it's a different kind of album, much more folk influenced... or a song like 'I Saw A Car' (laughs). But for some reason all the metalheads are into it and the music comes across, so they stop thinking in terms of genre. That's a very nice thing for me."

"The other thing is it might be a softer acoustic album, but that doesn't mean it's not intense," Anneke adds. "The dark moods are there, I come from metal, I like the dark atmospheres in music, so even if the music isn't played heavy the intensity is still there. Metal fans in general are very open-minded anyway; they listen to Fleetwood Mac and Dolly Parton and all kinds of different artists. Metal and prog people are also very serious about music, which is what I find when people like you hear the album and tell me it doesn't matter what it sounds like as long as it touches something inside you."

When word of The Darkest Skies Are The Brightest's impending release began to circulate, Anneke made no secret of the fact it was inspired by problems in her marriage to longtime partner Rob Snijders. She could have opted to say nothing in the bio or to the press about the deeper issues that pushed her to create the album, but instead Anneke made the brave decision to bare her soul to world.

"Actually, I doubted myself for a while because we finished the album when the whole lockdown started," Anneke admits. "I was in the process of fixing my life and doing what I needed to do to work through my issues, and in the meantime writing this album. Obviously a lot of the emotion I was feeling went into the songs, and then this whole pandemic situation occurred. I was thinking 'I have this album, the whole world is upside down, what do I say?' If I talked about my marriage it just seemed futile because it was only me and my world against a backdrop of everything that is going on right now. I figured I shouldn't say anything - like you said, just put the album out and leave it at that - but I did an online gig during the first lockdown (in early 2020) and played one new song. I got so many reactions to it with fans saying they understood it, they were going through the same thing, and I realized it was a universal topic. Everybody has their challenges, particularly as they get older, in terms of love and relationships and everything else. I decided I'd talk about it to whoever wants to hear about what this album is about, and I felt strengthened by the fact this is just a universal theme." 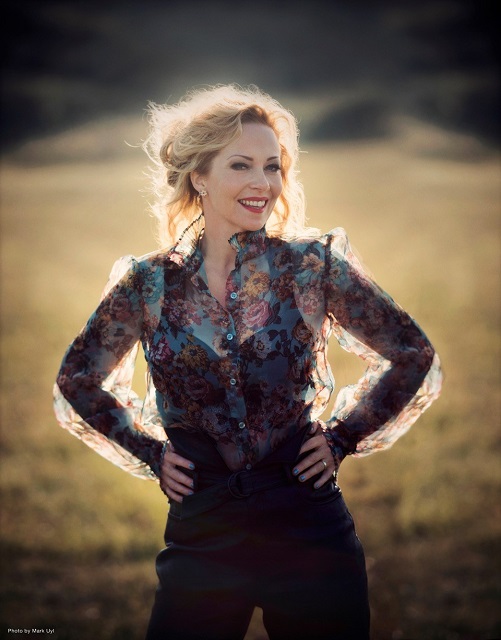 The Darkest Skies Are The Brightest isn't a concept record, but if you take the time to listen it seems to tell the story of Anneke working through her issues.

"Exactly. The thing was, I started writing this album because my life was kind of a mess at the time. Not only stuff in my marriage, but things didn't go so well with VUUR. I was ready to make a new album with VUUR immediately because I wanted to push forward and get our name out there, but I started writing and all this other stuff came out of me, softer and more melancholic songs. And there is a line running through some of these songs, yes, absolutely."

It's a very personal record that pulls you in, and assuming your blackened heart still beats one gets a sense of relief by the time The Darkest Skies Are The Brightest closes with the empowering "Love You Like I Love You".

"Very much so," Anneke agrees, "and obviously in the meantime I worked on the things that were going on in my life while I was writing the album. I and we came out better than we were before it started. I have a good marriage and my life is good in general, but sometimes things slip through your fingers and you don't really know how. You kind of realize in the midst of everything, 'Shit, I'm losing grip on my love life and everything else.' I had to do a lot of work to get back to where I wanted to be. Like you said, when this album was done I felt totally relieved, happy and at peace."

Anyone in the business who has had the pleasure of working with Anneke and her husband Rob - who works tirelessly behind-the-scenes and steps up as Anneke's drummer - would have been surprised by news of their marital problems. Writing an album about that struggle... what was Rob's reaction to it?

"When I wrote the first ten or 12 songs I didn't have the guts to let Rob hear them (laughs). First of all because I didn't know if they were any good because they were just first drafts of everything. But, Rob has a good ear and he's very realistic, and he's critical because he wants me to create something of quality. But because a lot of the songs are about him I was twice as afraid to let him hear them. Obviously at some point I had to, and the songs that made the album, he really loved them. The songs are my heart, my effort and my perspective on things so he doesn't have to like them, but it helps a lot that he does (laughs). In terms of musicality and production Rob has some ideas here and there, so at some point he got involved in that, too."

And the album is rich with said musicality. Talk about acoustic music and there are inevitable stereotypical visions of Renaissance Fair folk-isms or coffee shop hipster sit-ins offering up straight-laced and painfully predictable ballads. The Darkest Skies Are The Brightest has serious depth through the use of voice, acoustic guitars, string arrangements, drums, groove, darkness, body percussion, horns, vocal harmonies, and the wonderfully weird 'I Saw A Car' which may well be the most experimental song of Anneke's career.

"I really appreciate that you hear all that. I didn't think about and plan that - I never do - but this time I went by myself to a cabin in woods and write these songs because I didn't want to hear anybody say anything about what was supposed to happen. I didn't want to hear a producer say 'If we do this and that we can go to radio...' or anything from the record company, or even the fans. Everyone who listens to my music has expectations and my plan was not to think about that. This is what came out."

"For instance, 'I Saw A Car' is a bit of strange song. It was during the recording of the album that I wrote the song - the lyrics, the groove, and the melodies just kind of rolled out. I recorded it on my laptop thinking 'This is just strange but somehow it makes me happy.' I went to the studio the next day and said to my producer, 'I wrote this song but I don't know if it's good because I've never written something like this before.' He said 'It makes me happy so let's work on it and see where it leads us.' And it made the album. A lot of people comment on 'I Saw A Car' because it's the odd one out with the groove and the weird lyrics, but it came out so naturally."

This begs the question as to whether Anneke will now focus on the metal side of her musical personality with VUUR. Pushing four years gone since the debut, it seems the band has some unfinished business.

"Not yet. VUUR is my baby and it still exists, and I can always go back to it when I want to do something heavy with people in the metal scene. It's a very open project. But in terms of future plans, when we're finally able to go out and play again I will tour extensively for The Darkest Skies Are The Brightest. To be honest, I have more acoustic song ideas so maybe there will be another album like this one next, but there is no definite plan. I will just keep writing and see what comes out."