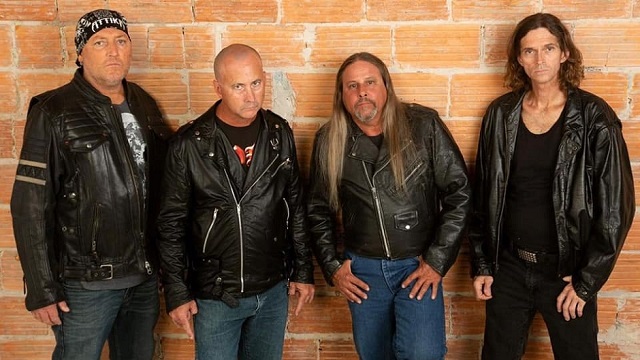 “It’s exciting, especially for a time like now after last year with nothing to do, nothing to go see.” These are the words of Attika singer Rob Van War, whose band is ready to release their first album in 30 years, Metal Lands, through Pure Steel Records. While his vocals are aggressive ooze power throughout the album’s ten tracks, Van War is soft-spoken, down-to-earth, and happy for his bandmates to relish that first time feeling of having a record released.

“It’s kind of like a newer band in some ways,” explains the vocalist, “when you add Bill (Krajewski, guitars) and Glenn (Anthony, bass), who have actually been with Jeff (Patelski, drums) and me for a long time and I’m excited for them to see themselves on an album that’s come to fruition with their music and I’m also excited just to get the Attika name back out and see what happens.”

Pure Steel wanted Metal Lands readied to coincide with the reissue of their last album, When Heroes Fall, in 2019. While setbacks occurred, Van War thinks it turned out for the better that Metal Lands was delayed.

He relays, “It gave us more time to think about those songs. Even though we had them, they may have been more rushed than they should have been if we tried to push it out as quickly as they were hoping.”

Of the ten songs presented on Metal Lands, five are “older” songs that were originally written demoed off and on throughout the years and the rest are “new” songs that came about when Metal Lands was in focus and an album was underway. Krajewski had a mountain of guitar ideas to present to the band and VanWar had to teach him the way of organizing the ideas and into a song and how to properly structure riffs and put them together.

“He’s a brilliant guitarist and he knows,” chuckles Van War. “But as far as songwriting, he was still kind of new at it, putting it together, and figuring out what works well with the other pieces he had. I had to dissect it like a puzzle and put it back in a way I thought made more sense. And I said to him, ‘do you get this?’ And he’s like, ‘oh yeah man, that’s awesome!’ Once we had a plan, he started to grow, so like with ‘Thorn In My Side’, he came to me with everything, even the lyrics, I only wrote the last verse because the thoughts didn’t pertain to the song. And I said, ‘dude, I got to have this make sense!’ 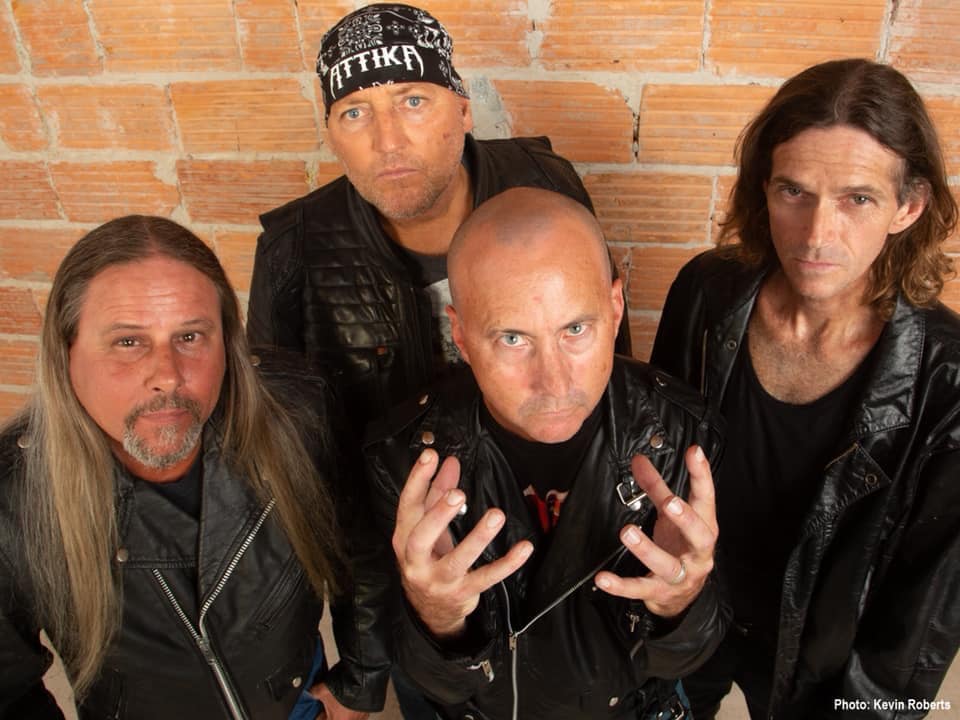 Van War was pleased to see the growth in Krajewski to make the new cuts take off and that’s the strength of Metal Lands – no-frills, powerful heavy metal that does not mess around. Var War has seen a great maturity of the band from 30 years ago are aiming high.

“30 years ago was a different atmosphere, attitude, everything,” he confides. “Metal Lands a bigger slice of a pie. If 30 years ago, your audience was a thin sliver, we are hoping to get a bigger chunk of the pie this time with listeners and attention, and everything!”

The opening and title track sets the stage and is accompanied by a lyric video. Metal Lands is a dystopian future that feels like Mad Max and the protagonist featured on the cover is adventuring through there and lyrically features a call back to their older song, “Black Rose”.

“That was my idea, with ‘Black Rose’, when Joe and I were writing that, I was writing this post-apocalyptic type theme,” confirms Van War. “I got inspired by it back in the day with the Mad Max stuff and even with Ozzy Osbourne’s ‘Killer Of Giants’ – ‘If the button is pushed, there’ll be nowhere to run.’ I was like, ‘well, that’s true. What happens after it?’ Maybe it’s Mad Max? So with ‘Black Rose’ is kind of like Star Wars where it stars not necessarily with the first book. ‘Metal Lands’ would be like the second chapter or middle chapter. And then we’ll have the prequel before; so it’s like Star Wars in some ways.” 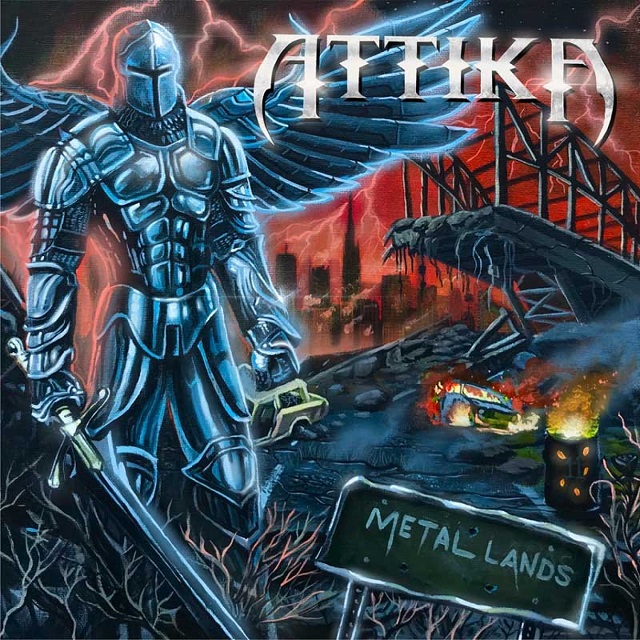 The artwork illustrates this world and was done by Daniel Charles, who died on January 1. The 38-year-old, Texas based artist also worked on Glacier’s newest album, The Passing Of Time. The knightly, heroic figure on the cover has become Attika’s mascot and goes by the name of Warok.

Var War details the idea behind the artwork, “I was talking about Metal Lands and it’s just got to be like a wasteland of sorts. I started developing this character in the song and I said, ‘he’s kind of a protagonist. We got to make this like a warrior.’”

“He sent a picture of it just with pencil and some ideas in color,” he goes on to say. “I went, ‘well, this is going to be intense!’ Basically, through emails and talking, he took what we were trying to communicate and put it in a painting and it was unreal. I love the bridge that’s like blown in half with decay in the city in the background. And if you look in the front corner, there’s a little black rose growing.”

The hammering and critical “Sincerely Violent” isn’t friendly towards politicians. One of the older songs, Van War wanted to keep the lyrics timeless and neutral, but had trouble nailing the vocal delivery.

“Why don’t I almost kind of talk it type of thing, not quite Tom Petty and not quite Dave Mustaine type of thing?” pondered the singer. “The first time I tried it, I read it like Hal Holbrook would and that didn’t work. I then added an attitude like Dave Mustaine and the guys were like, ‘that’s really cool!’ They said, ‘it’s not ‘Sweating Bullets’, but it’s really cool.’

Through the midst of the Metal Lands, an unexpected volley of fire comes in the form of “Gold”, a cover of the 1979 hit from Jonathan Stewart. It’s a song Van War has always resonated with.

“I just fell in love with it when I was much younger,” he confides. “I had seen Jonathan Stewart open for Chicago back in ’79 and it was a top five, top four hit at the time. It was on all the time and it was totally different. I love that he’s turning the music into gold and since gold is a precious metal, I was like ‘it belongs in Metal Lands!’ (laughs).”

Metal Lands ends its journey with the moody, almost haunting ballad of “One Wish”, which Var War insists is not based on anything personal he went through.

Var War says, “A lot of people don’t believe me, but it’s actually fictitious. It was from a couple different thoughts I had about seeing different people’s relationships. And then I had a dream about something and I just pieced it together. Now everybody I know personally says, ‘dude you’re just saying that so you sound tough’ and I’m like ‘no, really’, but you know, we’ll let them determine what it is.”

Attika is waiting for an opportunity to hop back on the road after COVID-19 blows over and while some bands have taken the chance to offer livestream performances, Var War says the band isn’t too keen on the idea.

“The guys said it would be like shooting a video,” states Van War. “You got four that are holding cameras and how do you do that? I said, ‘well, it’s like doing a video. You just kind of act it out, but you got to have fun make it look real.’ They’re like, ‘yeah, let’s just wait and see.’ I know doing some of the video stuff, it gets difficult, especially if there’s multi-cameras set up. We are older so we couldn’t even pull of like, an in your bedroom stream or acoustic tune over the internet together because I don’t know how to do that. None my guys do either, we kind of missed that class (laughs).” 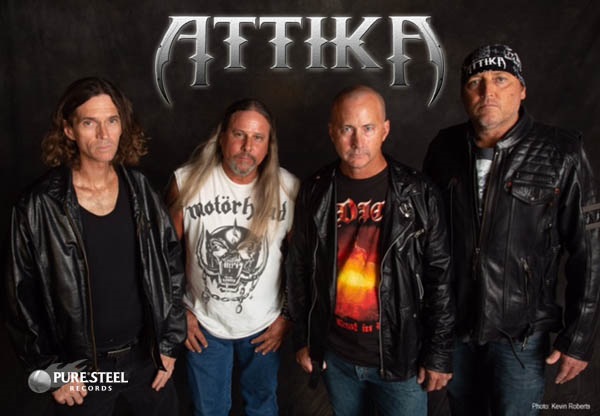 Fans don’t have to worry about waiting another 30 years for the follow-up to Metal Lands either as music ideas are being worked on and Van War is also working on a solo project.

On the follow-up to Metal Lands, Van War divulges, “Bill and I are starting to put together ideas. He is a beautiful soul, he’d give the shirt off his back, but sometimes he gets in these dark crevices and I have to pull him out. He sends me this and I’m like, ‘music’s great dude, but oh my goodness, I can’t sing that. It’s not like evil, but it’s just too dark! We’re not like that.’ I think that the stuff’s going to be really cool and we’re definitely going to have some of those up-tempo songs. We’re not going to stray too far away, but at the same time, you got to show growth.”

As for the solo record, Van War is working with younger musicians and while nothing is set in stone, it will show different ideas and another side of the frontman.