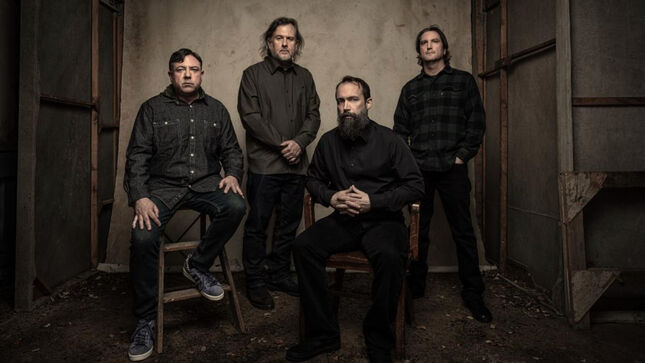 Germantown, Maryland metallers Clutch have returned writ large with a new tour and a new studio proposition. Sunrise on Slaughter Beach is the band’s 13th album in the 29 years since the Transnational Speedway League debut, and it finds the guys rocking hard, fast and, as lead vocalist and storytelling wordsmith Neil Fallon says, “Efficient.”

“We all knew that we wanted to make a shorter album, by design,” begins Fallon, on the nine-track, 33-minute record. “I think the word that we used as a goal was to make an efficient album. And the other thing was, in the past, we liked to perform the new material live as much as possible before we recorded it. But obviously that was not an option this time around. So I think that kind of allowed us—or forced us, maybe—to try some creative avenues that we wouldn’t have otherwise, things like theremin and vibraphone and backing vocals and stuff like that. We recorded at J’s studio, but it was produced by Tom Dalgety. J. engineered it. And J. did play Theremin on the album, which now I’m trying to learn how to do that—it’s deceptively difficult. And he also did a lot of percussion. He’s very good at tambourines and shakers and that kind of thing.”

The production on the record is impressive and powerful but as importantly, quite rare of tone, specifically in that space between drums and bass, with four-stringer Dan Maines captured most distinctly. “Well, J’s studio, Magpie Cage, has a great drum room,” remarks Fallon. “That’s crucial to getting a good drum sound. And Jean-Paul (Gaster; the band is rounded out by Tim Sult on guitar), you know, he’s very particular about tuning his kit. He doesn’t have a huge kit, but he makes the most out of what he has. And I think Dan… you know, he has his Rickenbacker through an Ampeg, and I think that’s a pretty simple but winning combination. I think there’s more distortion there, but I don’t know off the top of my head what he played through, if there was like a distortion pedal involved. But that’s possible. I’m so preoccupied with writing lyrics that I seldom see or concern myself with, like, what kind of compressor the bass may be going through.”

Speaking of lyrics, Fallon is beloved for his craft in this regard, evidenced by the fact that at the first show of the tour here in Toronto, folks were singing along with every tongue-twister and twist in the tale. “I’m always stressed when it comes to that,” chuckles Neil on putting quill to parchment. “It’s like, I love it and I hate it at the same time. It gets more difficult the longer you do it, to come up with fresh angles on things. But some songs, like for example the last song, ‘Jackhammer Our Names,’ I wrote those lyrics at least five years ago and I was just waiting for the right kind of music that they could live in.” 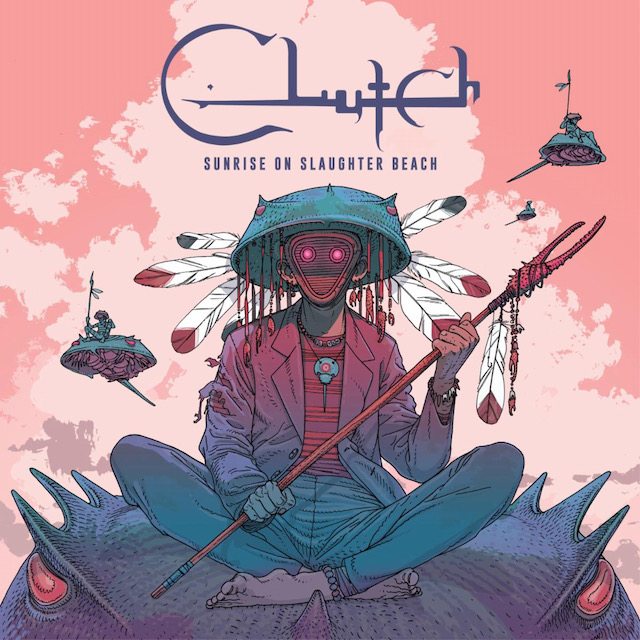 On that note, there was curious missive from J-P in the press release, where he said that he thought the album was going to turn out more upbeat, like Earth Rocker, but then it went in another direction. “There’s a lot of riffs that got written that I didn’t write lyrics to because I just couldn’t figure out how to wrap my head around them,” responds Neil. “The very first song we wrote was ‘Strive for Excellence.’ And I think we were trying to… we did not want to write a record that was about the previous two years. But having said that, I think the best writing occurs when you write with your heart, not your head.

And if you have too many preconceived notions, it can get insincere. So I think it was us following whatever subconscious currents were going on. And certainly I don’t think it is about these past two years specifically, but it would be disingenuous to say that it didn’t affect me or anyone else for that matter, psychologically in some manner.”

Elaborating on the Covid experience, Neil says, “All our families dealt with it and in the same way—we took it very seriously. But since we all were on the same page, we didn’t have any problems getting together, the five or the four of us, and you know, doing the Doom Saloon recordings or rehearsing or what have you. I’m always kind of reluctant to talk about it because I don’t want to make it sound like we had it particularly harder than anyone else. I mean, we all had experiences with this—each and every one of us.”

Truth is, it’s kind of a good idea not to have lockdown reflected in the record, because 120 years from now when humanoids are grooving to Sunrise on Slaughter Beach on Apple implant, they’re going to be wondering what a vax passport is. “Yeah, I think sometimes if you date songs, it can kind of get stale. And you know, I don’t really write personal lyrics either. I don’t dig the notion of reliving some diary entry year after year—that’s not appealing in the least.”

“Strive for Excellence” has been framed as a “nostalgic” song. “Yes, and probably because I’m a father and my kid’s 12. Seeing him be a young kid brings back memories of my time at the same age. And I was just kind of thinking that kids nowadays, even before the pandemic, spend too much time indoors, and not skinning their knees and staying out past curfew. I think there is such a thing as good trouble.”

But look for piles of typical Clutch wordplay, on top of musical backtracks that are exactly as Neil has framed them—efficient. Fact is, Sunrise on Slaughter Beach sounds like a long, expensive album, with tons of detail, thoughtful riffs and chord changes, atmospheres, tempo changes, and again, back to the lyrics, the odd yarn.

“As the singer or the writer, every time you tell it, you can imagine it in a different way,” reflects Neil, on why he likes sets of lyrics that tell a tall tale. “And the people that listen to it are all imagining it in a different way. It’s sort of like reading a book again: you’re gonna see the same words, but the images that are evoked are never going to be quite the same. And I know this doesn’t sound very intellectual, but it’s just fun. And I don’t think there’s anything wrong with the pursuit of fun, in music.”

Concerning “Slaughter Beach,” for which the band has done a swanky video (with colours matching the album cover), Neil says, “I was vacationing with my family in Delaware, where they have this place called Slaughter Beach. I’ve always been taken with the name; it’s just sounds like a B-horror movie. And sunrise is something that just came to mind. The song itself isn’t really about anything reality-based. The idea is like sometimes being on the beach by yourself can be a surreal experience and kind of existential in a lot of ways.”

It sounds like old Clutch—very old Clutch. “Yes, that song’s got a slower groove, a bigger swing than maybe some of the previous releases. As far as singles go, the conventional wisdom says that you pick your shorter songs that people can listen to and get a hook right out of the gates as opposed to your more esoteric material.” 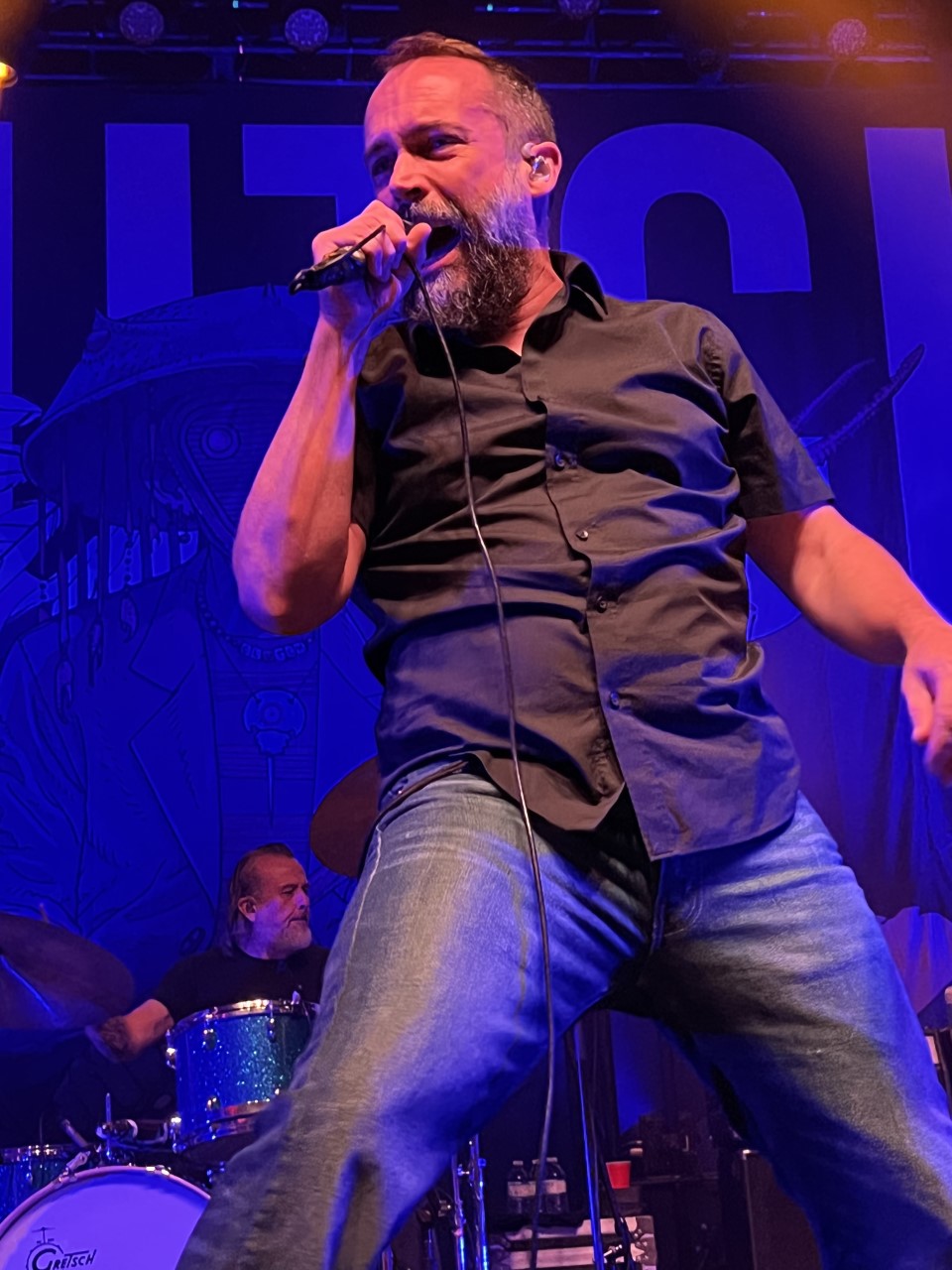 I asked Neil what Clutch’s relationship with the blues was. After all, this is a pretty hard band to categorize, but the blues comes up often when folks try to describe Clutch, along with heavy metal and even stoner rock.

“Any band has a relationship with the blues, whether they like it or not, or don’t care to admit it,” muses Neil. “Even the most gnarly black metal band from Finland, you can draw a line from what they’re doing all the way to Chicago and down eventually to the Mississippi Delta and then West Africa. I think with us, this has been a learning experience, from where we kind of started as kids. You realize there’s so little you do know that I almost feel like I’m still doing catch-up work trying to learn the history of rock ‘n’ roll backwards, if that makes any sense. So, you know, I love the blues. It’s just a great point of reference. And because we’re around hard rock and metal so much, it’s nice to hear. It’s nice to dip your toes in the source here and there.”

I bring up the idea of Clutch’s association with “old-timey” music, like The Band and Creedence Clearwater Revival, even gathering the courage to call them a civil war band. I don’t think he bought it!

“It’s hard to say or for me to talk about it, because I’m so close to it,” chuckles Neil (clearly thinking I’m an idiot). “Yeah. I mean I love folklore and Americana, but not in the sense of… It’s like mythology; it’s a great thing to draw from because you mention a place or a name or an event and immediately all the things that are associated with that get infused into your song. It’s sort of a convenient thing to do lyrically.”

But in this day and age, you don’t want to come off as too political. “Yeah, I mean, there are people who are going to find politics wherever they look. So I think with writing, it’s one thing if you’re trying to be malicious—you should be called out on it. But if artists suddenly have to self-edit before they even put their work out there, then I think that’s a very slippery slope.”

Sunrise on Slaughter Beach is out now, as is the band—Neil, Tim, Dan and J-P—themselves, coming to your town soon (or, if you’re unlucky, having just left). Supporting is JD Pinkus, Quicksand and Helmet, making for a swell night of hard-to-categorize heavy sounds destined to make you think while you drink.