DAYGLO ABORTIONS Talk New Album, Early Days – “A Lot Of Punkers Have Always Scoffed At Us” 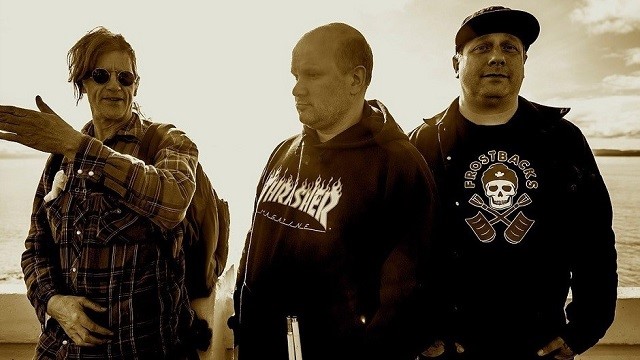 On March 25th, the world was treated to another offering from veteran Canadian punks, the Dayglo Abortions, entitled Armageddon Survival Guide (via Unrest Records). The band has been at it since 1980, and over the years has offered such in-your-face album titles as Feed Us a Fetus, Two Dogs Fucking, and Corporate Whores, and are currently comprised of members Murray Acton AKA "The Cretin" (guitar and vocals), Willy Jak (bass), and Blind Marc (drums). The Cretin spoke with BraveWords correspondent Greg Prato days after the album's release, and discussed the band's metal roots, his thoughts on his bandmates, and his picks for favorite DGA albums.

BraveWords: In your estimation, are the Dayglo Abortions one of the longest running punk bands still around today?

Murray "The Cretin" Acton: "I don't know, there are some real long-winded bands. DOA has got us by a couple of years, for starters. I mean, I don't know how many 'final shows' DOA has played, whereas we have never played a final show. But the UK Subs, too, eh? The UK Subs have been around forever. But we've been around for a while - since 1980. 36 years."

BraveWords: Why did it take 12 years to offer a new album?

Murray "The Cretin" Acton: "Well, we've been through a lot of changes in the last 12 years. We're not renowned for being the most productive band on earth, for starters. But in the last twelve years, our original drummer, Jesus Bonehead, left the band, and he was also doing management and he also ran a label. So we've picked up a label, replaced a drummer, done some fairly major things since then. And that sort of slowed it down a bit. And then we did record the record three years ago or something like that as well, too. It's taken a while for it to come out. But it has been an awful long and painful delay, I'll admit that."

BraveWords: How is Armageddon Survival Guide similar or different to previous Dayglo releases?

Murray "The Cretin" Acton: "One of the things is when I started out on it, I've been through a couple of phases of records, because in the meantime, I kept writing songs - like I was going to do an all love song album, which I had them all together but couldn't talk anybody into going there! And then finally got it together for this. What I wanted to do was get back to simple stuff - short, simple songs like we did way back in the day there. So a lot of the songs are very short and simple. And wanted to keep the theme of this continually…of when Armageddon comes around, it's always, 'Next Wednesday is Armageddon. It's the end of the world, guaranteed!' Christ, I've survived several Armageddons."

Murray "The Cretin" Acton: "I like 'Your Facebook Can Kiss My Assbook' in a lot of ways. I like the stuff that's right to the point. I wrote in little bursts, and got out some ideas. I think we did a pretty good spoof of a punk rock anthem with 'To Prove That We Are Free.' Blind Marc, our new drummer, he did stellar, aggressive drum tracks. I really like how he starts off 'Your Facebook Can Kiss My Assbook' and it goes into this song, 'Cockroaches,' which includes his little rendition of the Lombardo drum fill off of Slayer's 'Raining Blood' at the beginning of it. He really nailed it on the record."

BraveWords: You just mentioned Slayer, and since BraveWords is primarily a metal-based site, do the Dayglo Abortions have a metal side to them?

Murray "The Cretin" Acton: "Oh, shit yeah. I grew up in the '70s - I'm older than punk rock. I grew up with Black Sabbath. Actually, what probably got me into punk rock really in a lot of ways was when Ozzy left Sabbath, and metal started to get into eyeliner and spandex, and I was looking at that, going, 'Yeesh. This isn't for me.' It was not going in the direction that I was wanting it to go. And I'd always been into the songs of revolution and stuff, I was always impressed with people that could really get some anger into their stories…meaningful stories. Punk rock was attractive. It was sort of like folk music - of people's trials and tribulations. It was like folk music but with lots of swearing in it, I guess. The metal side of it, we've played quite a few shows with Napalm Death, and they were very appreciative of our stuff. I was quite shocked. Because not a lot of metal bands really give punk rock a second thought. As far as they're concerned, it's just a lot of people making noise, and not the musicianship that a lot of the metalheads are hoping for. Which is not completely unfounded, but there's some profoundly good musicians playing in punk rock, as well. But the guys in Napalm Death - especially Barney and Mitch - are just stellar guys. I was very impressed with their integrity as people, overall. And they said what they liked about it was that we were not really a punk band - we were sort of a hybrid of metal. I was concerned in the early days that nobody was going to like this, because it was just way too 'metal.' And a lot of punkers have always scoffed at us - 'They're not a punk band, they're a metal band!' We are what we are. In the '70s, I liked Michael Schenker - I was a big UFO fan and a Black Sabbath fan. So that's where a lot of my origins come from - from a lot of strange places."

BraveWords: How would you describe the personalities of all three band members?

Murray "The Cretin" Acton: "Will and Marc are both on Jaks Team - an international skateboard team. Marc, the drummer, is blind - he's legally blind. White cane and everything like that. And he still skates, himself. If you can believe it, a blind skateboarder. He's the kind of guy that I've never heard him complain about anything. He is just such a positive person. This guy, he went blind when he was about ten, from a disease. And that's got to be something that is hard to deal with. And he has never whined about a single thing, I've ever heard. He's always on course, always on track. Will is a quiet guy - he's a 'stay home sort of dude.' He likes playing his bass, sticks to his job. He's a determined person. And he's up for all kinds of things - trying to better himself. We're a pretty good group. We've been through some members. But these days, we can go driving down the highway and get absolutely lost and you don't hear anybody complaining. It's like, 'Oh well. I'm sure we'll figure it out and get there.' Everybody is really chill - not a lot of the stuff that we've had, some drama. We've had some drama queens over the years. These guys are all really solid. I can't say anything but compliments about them, really." 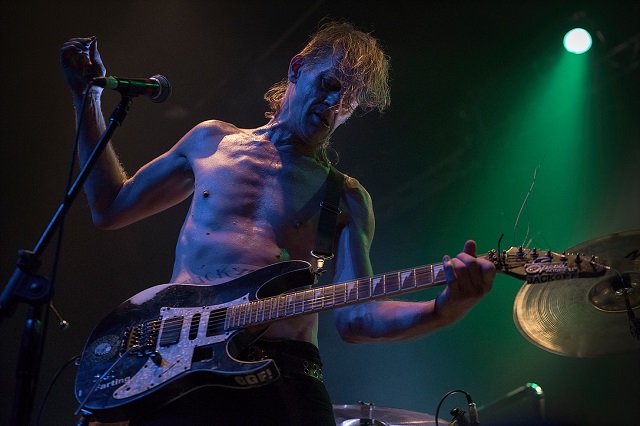 BraveWords: And how would you describe your personality?

Murray "The Cretin" Acton: "I'm insane, I guess. [Laughs] They think I'm nuts. They sort of look at me and go, 'Oh yeah, OK, whatever.' I'm a nut and I'm a jerk, I guess. I try not to be - I try to be respectful of everybody. I think it's really important to have respect for the world. As a traveling band, especially when you're not super huge, you stay at people's houses, and you're really dependent on the hospitality of the people on the scene where you're playing. And they're good to us - they cook us home cooked meals, they take us out to the local bars, and we get to see the world from a good point of view. I think it's very crucial to maintain that sort of extended family sort of thing. I love life, what can I say. Every day, I get up, and I'm just like, 'Woohoo! Let's go!' I'm not a super-positive guy - I can tend to get a little bit dark sometimes, but I still love life. The ugly side and the good side of it."

BraveWords: If you had to pick your favorite top three Dayglo Abortions albums, which would they be?

Murray "The Cretin" Acton: "I'm going to have to say this new one - thanks to Rob Shallcross, our producer, this is definitely the best sounding one. I'm really happy about the playing and musicianship on it. So I'm going to have to say right now, I'm definitely into this one. Of course, the earliest ones too - Out of the Womb was special, just because it was our first one. About half of Feed Us a Fetus was Out of the Womb. And I like Two Dogs Fucking too, because that was me and [guitarist] Mike Jak just having a wankfest - self-gratifying solos everywhere. We had a good time making that one, as well. It's difficult for me to rate shit like that, because it's personal to me. I like it to the point where it makes me sick after a while, and I just go, 'I can't listen to that anymore.' I've got a rule around the house - don't be playing any bloody Dayglos around here. My kids would follow me around when they were young with a ghetto blaster, cranking it. Just to torment their old man."